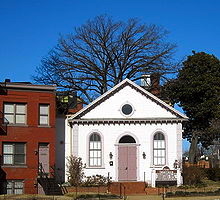 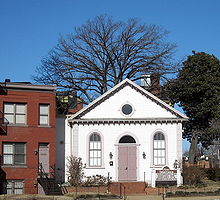 Former headquarters of the Church of God and Saints of Christ in Washington, D.C. The building is now known as First Tabernacle Beth El and is listed on the National Register of Historic Places.

Dozens of Black Hebrew groups were founded in the United States during the late 19th and early 20th centuries, from Kansas to New York City, by both Americans and West Indian immigrants. In the mid-1980s, the number of Black Hebrews in the United States was between 25,000 and 40,000. In the 1990s, the Alliance of Black Jews (which is no longer operating) estimated that there were 200,000 African-American Jews; this estimate was based on a 1990 survey conducted by the Council of Jewish Federations. The exact number of Black Hebrews within that surveyed group remains unspecified.

While Black Christians traditionally have identified spiritually with the Children of Israel, they never claimed to be descendants of the Israelites. In the late 19th century among some African Americans, an identification with the ancient Hebrews developed into an identification as ancient Hebrews. One of the first groups of Black Hebrews, the Church of God and Saints of Christ, was founded in 1896 in Kansas, but it retained elements of messianic connection to Jesus. During the following decades, many more Black Hebrew congregations were established, some without any connection to Christianity.

After World War I, for example, Wentworth Arthur Matthew, an immigrant from St. Kitts, founded a Black Hebrew congregation in Harlem, claiming descent from the ancient Israelites. He called it the Commandment Keepers of the Living God. Similar groups selected elements of Judaism and adapted them within a structure similar to that of the Black church. He incorporated it in 1930 and moved the congregation to Brooklyn, where he later founded the Israelite Rabbinical Seminary, where Black Hebrew rabbis have been educated and ordained.

The beliefs and practices of Black Hebrew groups vary considerably. The differences are so great that historian James Tinney has suggested the classification of the organizations into three groups: Black Jews, who maintain a Christological perspective and adopt Jewish rituals; Black Hebrews, who are more traditional in their practice of Judaism; and Black Israelites, who are most nationalistic and furthest from traditional Judaism.

Black Hebrew organizations have certain common characteristics. Anthropologist James E. Landing, author of Black Judaism, distinguishes the Black Hebrew movement, which he refers to as Black Judaism, from normative Judaism practiced by people who are Black (black Judaism). Significantly, it does not depend on documented lineage to Jewish ancestors, nor to recognized Orthodox or Conservative conversions:

“Black Judaism is … a form of institutionalized (congregational) religious expression in which black persons identify themselves as Jews, Israelites, or Hebrews…in a manner that seems unacceptable to the “whites” of the world’s Jewish community, primarily because Jews take issue with the various justifications set forth by Black Jews in establishing this identity. Thus “Black Judaism,” as defined here, stands distinctly apart from “black Judaism,” or that Judaic expression found among black persons that would be acceptable to the world’s Jewish community, such as conversion or birth to a recognized Jewish mother. “Black Judaism” has been a social movement; “black Judaism” has been an isolated social phenomenon.”

Landing’s definition, and its underlying assumptions about race and normative Judaism, have been criticized. But, it provides a helpful framework for understanding some of the common traits that various Black Hebrew organizations share.