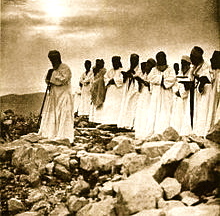 The Samaritans trace their ancestry back 3,000 years and consider themselves as the origin of the tribe of Israel. This clip shows the Passover sacrifice on Mt Gerazim. Presenter Reverend Peter Owen-Jones visits the small Samaritan community on Israel’s West Bank and explains their history and origins linking them with this part of the land, and comments on their adherence to their teachings. The Samaritans then gather on Mt Gerazim for the Passover sacrifice. At sunset, between 40 and 50 sheep are sacrificed as part of an ancient ritual. The presenter comments on the place of sacrifice in Judaism and Christianity.

Samaritans, from a photo c. 1900 by the Palestine Exploration Fund.

The Samaritan religion is based on some of the same books used as the basis of mainstream Judaism, but differs from the latter. Samaritan scriptures include the Samaritan version of the Torah, the Memar Markah, the Samaritan liturgy, and Samaritan law codes and biblical commentaries. Samaritans appear to have texts of the Torah as old as the Masoretic Text and the Septuagint; scholars have various theories concerning the actual relationships between these three texts.

Samaritans pray before the Holy Rock on Mount Gerizim 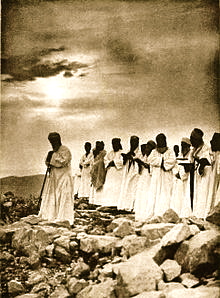 Samaritans pray before the Holy Rock on Mount Gerizim

* There is one God, YHWH, the same God recognized by the Hebrew prophets.

* The Torah was given by God to Moses.

* Mount Gerizim, not Jerusalem, is the one true sanctuary chosen by Israel’s God.

* Many Samaritans believe that at the end of days, the dead will be resurrected by Taheb, a restorer (possibly a prophet, some say Moses).

The priests are the interpreters of the law and the keepers of tradition; scholars are secondary to the priesthood.

* The authority of post-Torah sections of the Tanakh, and classical Jewish rabbinical works (the Talmud, comprising the Mishnah and the Gemara) is rejected.

* They have a significantly different version of the Ten Commandments (for example, their 10th commandment is about the sanctity of Mount Gerizim).

The Samaritans retained the Ancient Hebrew script, the high priesthood, animal sacrifices, the eating of lambs at Passover, and the celebration of Aviv in spring as the New Year. Yom Teruah (the biblical name for Rosh Hashanah), at the beginning of Tishrei, is not considered a new year as it is in Judaism. Their main Torah text differs from the Masoretic Text, as well. Some differences are doctrinal: for example, the Samaritan Torah explicitly states that Mount Gerizim is “the place that God has chosen” for the Temple, as opposed to the Jewish Torah that refers to “the place that God will choose”. Other differences are minor and seem more or less accidental.

The Samaritan mezuzah engraved above the front door Samaritans refer to themselves as Bene Yisrael (“Children of Israel”) which is a term used by all Jewish denominations as a name for the Jewish people as a whole. They however do not refer to themselves as Yehudim (Judeans), the standard Hebrew name for Jews, considering the latter to denote only mainstream Jews.

The Talmudic attitude expressed in tractate Kutim is that they are to be treated as Jews in matters where their practice coincides with the mainstream but as non-Jews where their practice differs. Since the 19th century, rabbinic Judaism has regarded the Samaritans as a Jewish sect and the term “Samaritan Jews” has been used for them.