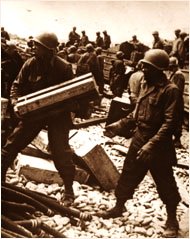 Though some black units, like the 320th Antiaircraft Barrage Balloon Battalion, were directly engaged at the front, others were restricted to manual labor, as in Normandy after the invasion.

African-American soldiers played a significant role in World War II. More than half a million served in Europe. Despite the numbers they faced racial discrimination: prior to the war the military maintained a racially segregated force. In studies by the military, blacks were often classified as unfit for combat and were not allowed on the front lines. They were mostly given support duties, and were not allowed in units with white soldiers.

The 320th Anti-Aircraft Barrage Balloon Battalion was the only all-black unit in the D-Day landings on Omaha and Utah Beaches. A view of the Omaha beachhead after it was secured, sometime around mid-June 1944.

Retired U.S. Army Colonel Bill De Shields, a historian and founder of The Black Military History Institute of America in Annapolis, Maryland, says, “The symbol of black participation at that time was ‘the Double V’. in other words, ‘Double V’ meant two victories: victory against the enemy abroad, and victory against the enemy at home. The enemy at home of course being racism, discrimination, prejudice and Jim Crow.”

Mr. De Shields says widespread racial discrimination throughout American society made it difficult for black soldiers. He says the early successes of the Tuskegee Airmen and other black units paved the way towards fully integrating the military.

The 320th looked for German snipers shortly after June 6, 1944, in St Laurent sur Mer, France. Mr. Davison can be seen looking toward the camera at the far right.

“The experiment and the participation African-Americans made during war time from World War II right on to the Vietnam War enabled us to make a change in civilian life. It shows you that blacks and whites working together, can work on a integrated basis. It shows that it does not disrupt the morale of the troops,” says Mr. De Shields.

When the war started, the American military had a long history of discrimination. Segregation was officially sanctioned, and the word “colored” sometimes appeared in parentheses after the names of all-black units. An Army instructor looks over a map before taking his students on a flight from Tuskegee, Ala., on Sept. 5, 1942.

As the war unfolded, acute manpower shortages, particularly by 1944, helped usher blacks far more quickly toward the front lines. In this photo, Lt. Gen. Lucian K. Truscott Jr., commander of the Fifth Army in Italy, talks to African-American troops of the 92nd Infantry Division after they threw back a German attack in the hills north of Viareggio, Italy, in 1944.

Despite orders from President Harry Truman in 1948 to integrate the U.S. military, black soldiers were still kept in separate units during the Korean War, which lasted until 1953.

Jack Jones joined the U.S. Navy in 1956. He says, “When I first came in blacks were relegated to service type tasks where you did cleaning, serving officers their food and doing their rooms. But by the time I got out African-Americans were all the way from the top down to the bottom. We had several admirals and a bunch of captains.”

By the Vietnam War of the 1960’s and 70’s the military was fully integrated and blacks soldiers were on the front lines and making a difference. African-Americans made up more than ten percent of all forces in Southeast Asia.

According to Mr. De Shields, “The Vietnam War was the one war in which blacks did it all. They were the generals, they were the leaders, they flew the airplanes, they drove the tanks, they were in combat units, they led troops in battle, they did it all and they did it well so there was nothing left to prove.”

Before the invasion of France, the number of black soldiers had risen to 700,000, but most were stationed in the United States; by December 1944, more than two-thirds were overseas. William G. Dabney, now 84, participated in the D-Day invasion at Normandy as a member of the 320th.