This will be the 48th edition of the Super Bowl in American football, and the 44th annual championship game of the modern-era National Football League (NFL). It is scheduled to be held on February 2, 2014 at MetLife Stadium at the Meadowlands Sports Complex in East Rutherford, New Jersey to determine the champion for the 2013 season. This would be the first Super Bowl to be played outdoors in a cold weather environment, the first in 38 years to be played outdoors on artificial turf and the first in which two US states (New York and New Jersey) will work together with hosting duties.  It will also be the first Super Bowl in NFL history to have two host teams (the New York Jets and New York Giants) as both play in the same stadium, thus it will be possible to have these two host teams play against each other should they get this far in the post-season.

Because it will be held outside, planners say there may be logistical issues that could arise that no other Super Bowl has ever experienced, including the possibility of holding the in-stadium halftime show in extremely frigid, inclement weather.

In the United States, the rights to televise the game nationally are held by Fox and simulcast in Canada on CTV and on the BBC and Sky Television in the United Kingdom. 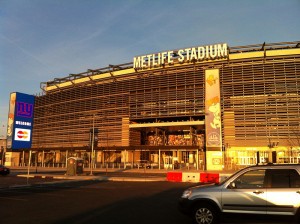 Three stadiums were part of the bidding to host the game:

South Florida / Miami was eliminated in the second round of voting. New Jersey beat Tampa in the fourth round of voting, after receiving a simple majority. 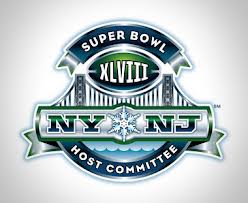 Super Bowl XLVIII will be the first NFL Championship Game to be held in the New York metropolitan area since December 30, 1962, when the Green Bay Packers beat the New York Giants in the original Yankee Stadium, 16-7. Since then, two other major pro football leagues have held title games in the area:

New York City was scheduled to host Super Bowl XLIV upon the completion of the proposed West Side Stadium. When the stadium proposal was rejected, Sun Life Stadium in Miami was selected to host the game instead. 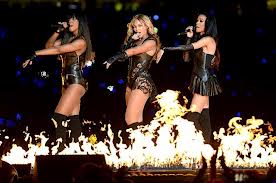 Halftime-show issues – who should perform at the haft-time of the Super Bowl.

As the first Super Bowl held at an open stadium in a city with cold weather, planners have indicated that there may not be a halftime show due to the weather.  One such logistical problem that could arise is trying to assemble and disassemble the halftime show stage during a cold blizzard.  However, the league has stated that an in-stadium Super Bowl halftime show will still be held.  According to Mike Florio of Profootballtalk.com, the NFL still wants to avoid a repeat of what happened during Super Bowl XXVI in January 1992 when Fox counter-programmed a special live episode of In Living Color; as a result of that ratings success, the league tapped Michael Jackson to perform during the following season’s Super Bowl XXVII, and more big-name talent since then to hold the TV audience.

The show is scheduled to be aired by Fox in the United States.  A special episode of New Girl and a new, yet-to-be-decided Fox comedy are scheduled to be the lead-out programs. 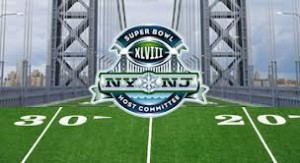 In February 2013, controversy arose with mayors of five local municipalities saying they would not provide emergency services, stating that they have been poorly compensated for past stadium events.  For example, Carlstadt, New Jersey mayor William J. Roseman stated, “The teams don’t care about budget caps and what the impacts are on the taxpayers of Carlstadt. I had to cut back my police department budget by a total of a million dollars over the last several years. While we are forced to lay off police officers, the owners of the Jets and Giants are filling their pockets at taxpayers’ expense.”