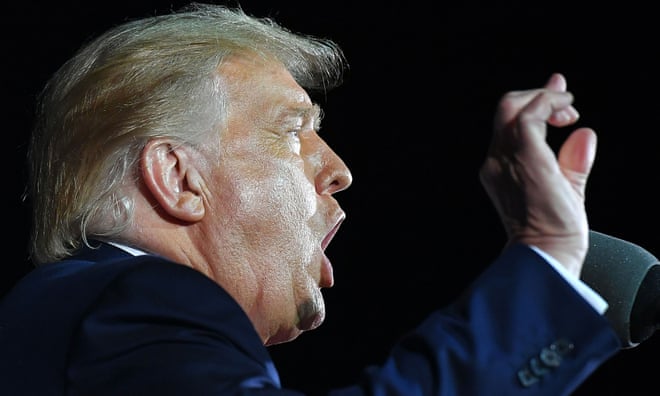 In the pages of Rage, Jared Kushner acknowledges that Donald Trumpis not wedded to the truth. Rather, both men find exaggeration a potent weapon in stirring opinion. Asked about the president’s propensity to inflate his achievements, Kushner responds: “Controversy elevates message.”Disloyal review: Michael Cohen’s mob hit on Trump entertains – but will it shift votes?Read more

If so, both the president and his son-in-law should be eternally grateful to Bob Woodward, his latest book and the ensuing tumult. By the president’s own tape-recorded admission, he was acutely aware of the dangers posed by Covid-19 but elected to lie about the dangerfaced by the American public.

The plague did not vanish, more than 190,000 are dead. When Jonathan Karl of ABC News pressed the president at a press conference about his lie, he was on very solid ground. To say otherwise is delusional – or fan fiction. Kayleigh McEnany, the latest White House spokeswoman, knows that for sure.

While the president claims his sole aim was to avoid chaos, the pandemic has fused itself to the social fabric. As the head of the Centers for Disease Control and Prevention has acknowledged, the effort to eradicate Covid-19 is a marathon not a sprint, and it is far from over.

And yet re-election is a real possibility. Florida has shifted, no longer leaning Democratic. A Biden-Harris win in Nevada appears less certain. Trump is down, but not out. Rage arrives at what may be an inflection point, formally published seven weeks before one of the most consequential electoral contests. However you slice it, the US stands polarized, a nation divided. To read more go to the link below: