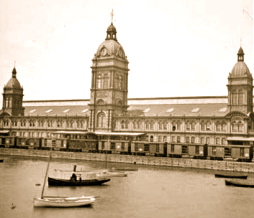 A behind the scene tour of Canada’s busiest train station. 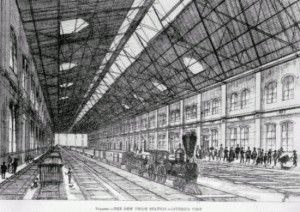 Toronto’s first Union Station was built by the Grand Trunk Railway in 1858 at a location just west of the present Union Station trainshed. Union Station consisted of three wooden structures and was initially shared with the Northern Railway of Canada and the Great Western Railway, although both railways soon built their own stations along the Toronto waterfront.

By the 1870’s, Toronto’s economy and population were booming and the old station was no longer adequate. The Grand Trunk built a new Union Station on the same site that opened on July 1, 1873. At the time it was the largest and most opulent railway station in Canada and was designed in the Italianate/2nd Empire style by architect Thomas Seaton Scott, who later designed Grand Trunk’s Bonaventure Station in Montreal. The builder was John Shedden & Co. and the Chief Engineer was the GTR’s E. P. Hannaford. The main entrance and façade faced the harbour rather than the city, underscoring the continued importance of boat travel on Lake Ontario. As the Grand Trunk absorbed several smaller railways serving Toronto, passenger trains were increasingly consolidated at Union Station. The arrival of the Canadian Pacific Railway in 1884 soon strained the facility beyond its limits, with its 3-track trainshed handling over sixty trains a day. 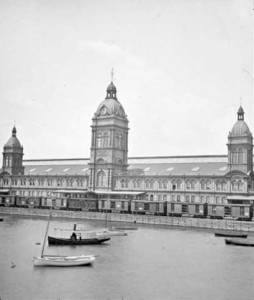 Union Station as viewed from the waterfront in 1888

In 1892, the railways agreed to expand the station through an extensive rebuilding program and Edmund Wragge was appointed the project’s Chief Engineer. A new three-track train shed was built on the south side of the 1873 station. The most distinctive feature of the redevelopment was a new 7-story office building on Front Street, built of red brick and Credit Valley stone. This was designed in the Romanesque style by the Toronto architectural firm of Strickland & Symons. The building’s façade closely resembled theBradford Gilbert-designed Illinois Central Station in Chicago that had opened in 1893. An arcade over Station Street connected the new and old sections of the station. Toronto’s new Union Station officially opened to the public on January 1, 1896, although the station had remained in constant use throughout the rebuilding.

This facility was a sprawling complex that never worked very well, either from an architectural or engineering point of view. An 1899 issue of Railway and Shipping Worldstated that “the general consensus of opinion is that the Toronto Union is one of the most inconvenient stations in (North) America, expensive to run and unsatisfactory in very many other respects.” 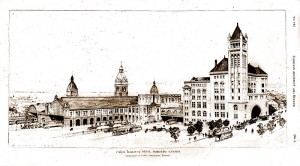 By the turn of the 20th century, Torontonians were once again clamoring for a better Union Station. The Great Toronto Fire of 1904 swept through the city’s warehouse and manufacturing district, including the block immediately east of Union Station. The GTR then appropriated the land bounded by Bay, Front and York Streets. It was decided to build a new Union Station on this site in 1905 but the railways and the city couldn’t agree on the design of the facility nor could they agree on how the tracks should be brought into the station. Meanwhile the old Union Station continued to serve the people of Toronto, to no one’s satisfaction. By 1911, there were about 150 trains and 40,000 people a day using the old station. Construction on the new station began in 1915 but was delayed by a wartime shortage of construction workers, financing and building materials as well as the impending bankruptcy of the Canadian Northern and Grand Trunk Railways. 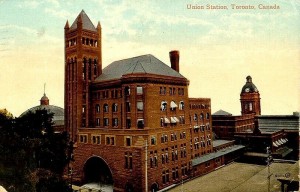 The Front Street expansion of the station, as seen in 1913

The new Union Station headhouse and east and west office wings were completed in 1920, but didn’t open to the public for another seven years while the railways and the city continued to argue over the approach tracks. Finally, on August 10, 1927, all trains were shifted to Toronto’s new Union Station and the dismantling of the old station began, a process that took almost a year. The 1895 office building on Front Street survived until 1931 when it too was demolished.

The site of the old Union Station is now occupied by the SkyWalk between York and Simcoe Streets that leads from the present Union Station to the CN Tower and the Rogers Centre (aka Skydome).

Union Station as it appeared in 1927
http://en.wikipedia.org/wiki/Original_Union_Station_(Toronto)
Prev
Next