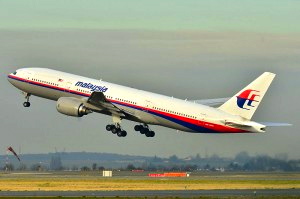 BREAKING! Malaysia Airlines Flight 370 With 239 On Board Goes Missing! 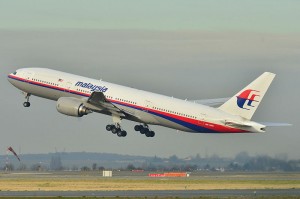 A joint search and rescue effort, later reported as the largest in history, was initiated in the Gulf of Thailand and the South China Sea.  The search area was later extended to include the Strait of Malacca, Andaman Sea, and the Indian Ocean.  On 15 March, investigators believed that the aircraft had first headed west back across the Malay Peninsula, then continued on a northern or southern track for approximately seven hours.

Two satellite images taken on 16 and 18 March showed potential aircraft debris in the southern Indian Ocean southwest of Western Australia, prompting increased search activity in the area.  Since 22 March, there have been almost daily sightings of marine debris in the search area made by various countries’ satellites.  However, none of the photographed objects has been confirmed as belonging to the missing aircraft.  On March 28, revised estimates of the flight’s fuel consumption after losing radar contact caused a move of the search area to 1,100 kilometres (680 mi) north-east of the previous search area.

On 24 March, the Malaysian government confirmed analyses by the British Air Accidents Investigation Branch (AAIB) and Inmarsat and concluded “beyond any reasonable doubt” that the aircraft had gone down in the southern Indian Ocean with no survivors.   On 29 March, the Government of Malaysia and the AAIB stated that, in accordance with the protocols detailed in International Civil Aviation Organization (ICAO) Annex 13 concerning aircraft accident investigation, an international team will investigate the loss of the flight.

The flight departed from Kuala Lumpur International Airport on 8 March 2014 at 00:41 local time (16:41 UTC, 7 March) and was scheduled to land at Beijing Capital International Airport at 06:30 local time (22:30 UTC, 7 March). It climbed to its assigned cruise altitude of 35,000 feet (11,000 m) and was travelling at 471 knots (872 km/h; 542 mph) true airspeed when it ceased all communications and the transponder signal was lost. The aircraft’s last known position on 8 March at 01:21 local time (17:21 UTC, 7 March) was6°55′15″N 103°34′43″E, corresponding to the navigational waypoint IGARI in the Gulf of Thailand, at which the aircraft was due to alter its course slightly eastward. Military tracking shows that the aircraft descended as low as 12,000 feet (3,700 m) after taking a sharp turn toward the Strait of Malacca. The sharp turn seemed to be intentional as normally it would have taken two minutes for the aircraft to make such a turn, and during that time there was no emergency call.

The crew was expected to contact air traffic control in Ho Chi Minh City as the aircraft passed into Vietnamese airspace just north of the point where contact was lost.  The captain of another aircraft attempted to reach the crew of Flight 370 “just after 1:30 a.m.” to relay Vietnamese Air Traffic Control’s request for the crew to contact it; the captain said he was able to establish contact, and just heard “mumbling” and static.

Malaysia Airlines (MAS) issued a media statement at 07:24, one hour after the scheduled arrival of the flight at Beijing, stating that contact with the flight had been lost by Malaysian ATC at 02:40. MAS stated that the government had initiated search and rescueoperations.  It later emerged that Subang Air Traffic Control had lost contact with the aircraft at 01:22 and notified Malaysia Airlines at 02:40. Neither the crew nor the aircraft’s onboard communication systems relayed a distress signal, indications of bad weather, or technical problems before the aircraft vanished from radar screens.

New Scientist reported that, prior to the aircraft’s disappearance, two Aircraft Communications Addressing and Reporting System(ACARS) reports had been automatically issued to engine manufacturer Rolls-Royce‘s monitoring centre in the United Kingdom; and The Wall Street Journal, citing sources in the US government, asserted that Rolls-Royce had received an aircraft health report every thirty minutes for five hours, implying that the aircraft had remained aloft for four hours after its transponder went offline.

The following day, Hishamuddin Hussein, the acting Minister of Transport, refuted the details of The Wall Street Journal report stating that the final engine transmission was received at 01:07 MYT, prior to the flight’s disappearance from secondary radar.  The WSJlater amended its report and stated simply that the belief of continued flight was “based on analysis of signals sent by the Boeing 777’s satellite-communication link… the link operated in a kind of standby mode and sought to establish contact with a satellite or satellites. These transmissions did not include data…”

Inmarsat said that “routine, automated signals were registered” on its network, and that analysis of “keep-alive message[s]” that continued to be sent after air traffic control first lost contact could help pinpoint the aircraft’s location, which led The Independentto comment on 14 March that the aircraft could not have met with a sudden catastrophic occurrence, or all signals would have stopped simultaneously.  After the attacks of 11 September 2001, in which three of the hijacked aircraft had their transponders switched off, there was a call for automated transponders; however, no changes were made as aviation experts opted for a flexible control, in case resetting was required due to malfunction or an electrical emergency.

On 25 March, Hishamuddin revealed that Inmarsat had found evidence that the aircraft had attempted another handshake with the satellite that came at 00:19 UTC, eight minutes after the last hourly report. The “partial ping” initiated by the aircraft that was unscheduled and not the result of any human interaction with the aircraft, is not yet understood.

“Using a type of analysis never before used in an investigation of this sort… Inmarsat and the AAIB have concluded that MH370 flew along the southern corridor, and that its last position was in the middle of the Indian Ocean, west of Perth. This is a remote location, far from any possible landing sites. It is therefore with deep sadness and regret that I must inform you that, according to this new data, flight MH370 ended in the southern Indian Ocean.”

Just before Najib spoke at 10 pm Malaysia Standard Time, Malaysia Airlines announced that Flight 370 was assumed lost with no survivors. It notified most of the families in person or via telephone, and some received the following SMS:

“Malaysia Airlines deeply regrets that we have to assume beyond any reasonable doubt that MH370 has been lost and that none of those on board survived. As you will hear in the next hour from Malaysia’s Prime Minister, we must now accept all evidence suggests the plane went down in the Southern Indian Ocean.”

Chinese Deputy Foreign Minister Xie Hangsheng reacted sceptically to the conclusion by demanding “all the relevant information and evidence about the satellite data analysis”, and said that the Malaysian government must “finish all the work including search and rescue.” If the official assumption of no survivors holds, it would be the deadliest aviation incident in the Indian Ocean, the deadliest in the history of Malaysian Airlines (surpassing the 1977 hijacking and crash of Malaysian Airline System Flight 653 that killed all 100 passengers and crew), and the deadliest involving a Boeing 777, surpassing Asiana Airlines Flight 214.

On 29 March 2014, the Government of Malaysia and the AAIB stated that, in accordance with the protocols detailed in International Civil Aviation Organization (ICAO) Annex 13 concerning aircraft accident investigation, they would set up an international team to investigate the loss of the flight.

On 11 March, it was reported that military radar indicated the aircraft had turned west and continued flying for 70 minutes before disappearing off the Malaysian radar near Pulau Perak, and that it was tracked flying at a lower altitude across Malaysia to the Malacca Strait. This location was approximately 500 kilometres (310 mi) from its last contact with civilian radar.  The next day, the Royal Malaysian Air Force chief denied the report.  A Vietnamese transport minister said Malaysia was informed on the day that they “noticed the flight turned back west but Malaysia did not respond.”

US experts, assigned to assist with the investigation in a low-key manner consistent with conventions of responsibilities, analysed the radar data and subsequently reported that the radar data did indeed indicate that the aircraft had headed west back across the Malay Peninsula, with Reuters and The New York Times saying that the route changes suggested that the aircraft remained under a trained pilot’s control.  The New York Times also said the aircraft experienced significant changes in altitude.

Although Bloomberg News said that analysis of the last satellite “ping” received suggested a last known location approximately 1,000 miles (1,600 km) west of Perth, Western Australia, the Malaysian Prime Minister Najib Razak on 15 March said that the last signal, received at 08:11 Malaysian time, might have originated from as far north as Kazakhstan.  Najib explained that the signals could not be more precisely located than to one of two possible loci: a northern locus stretching approximately from the border of Kazakhstan and Turkmenistan to northern Thailand, or a southern locus stretching from Indonesia to the southern Indian Ocean.  Many of the countries on a possible northerly flight route – China, Thailand, Kazakhstan, Pakistan, and India – denied the aircraft could have entered their country’s airspace, because military radar would have detected it.

Although it was later confirmed that the last ACARS transmission showed nothing unusual and a normal routing all the way to Beijing,  The New York Times reported “senior American officials” saying on 17 March that the scheduled flight path was pre-programmed to unspecified western coordinates through the flight management system before the ACARS stopped functioning,  and a new waypoint “far off the path to Beijing” was added.  Such a reprogramming would have resulted in a banked turn at a comfortable angle of around 20 degrees that would not have caused undue concern for passengers. The sudden cessation of all on-board communication led to suppositions that the aircraft’s disappearance may have been due to foul play.