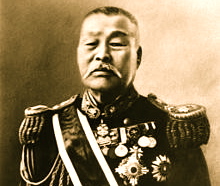 The Japanese Invasion of Taiwan (1895)

See how Japan conquered Taiwan and added it to its growing empire. 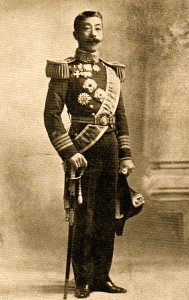 The Japanese invasion of Taiwan (Chinese: 乙未戰争) (May–October 1895) was a conflict between the Empire of Japan and the armed forces of the short-lived Republic of Formosa following the Qing Dynasty‘s cession of Taiwan to Japan in April 1895 at the end of the First Sino-Japanese War. The Japanese sought to take control of their new possession, while the Republican forces fought to resist Japanese occupation. The Japanese landed near Keelung on the northern coast of Taiwan on 29 May 1895, and in a five-month campaign swept southwards to Tainan. Although their advance was slowed by guerrilla activity, the Japanese defeated the Formosan forces (a mixture of regular Chinese units and local Hakka militias) whenever they attempted to make a stand. The Japanese victory at Baguashan on 27 August, the largest battle ever fought on Taiwanese soil, doomed the Formosan resistance to an early defeat. The fall of Tainan on 21 October ended organised resistance to Japanese occupation, and inaugurated five decades of Japanese rule in Taiwan. 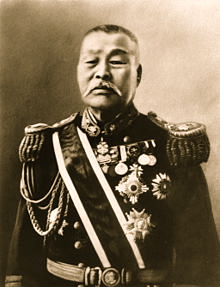 Born in Satsuma domain (modern day Kagoshima Prefecture) to a samurai family, Kabayama fought in the Anglo-Satsuma War and the Boshin War.

In 1871, he enlisted in the new Imperial Japanese Army and was accepted with the rank of major due to his previous combat experience. He was one of the defenders of Kumamoto Castle during the Satsuma Rebellion against his former Satsuma countrymen. He was subsequently promoted to colonel, and then major general, and placed in charge of the Tokyo Metropolitan Police.

In 1883, Kabayama changed from the army to the navy, becoming taifu(senior vice minister) of Navy with the rank of rear admiral, and was also ennobled with the title of viscount (koshaku) under the kazoku peerage system. The following year he was promoted to vice admiral.

Kabayama became Vice Navy Minister in 1886. He visited the United States and Europe from 25 September 1887 to 19 October 1888. He then served in several positions before being appointed Navy Minister under the first Yamagata and Matsukata cabinets from 1890-1892. Although not a politician, he spoke out harshly against representative democracy and civilian influence on the government in a speech Banyu Enzetsu made during the second Imperial Diet session. He retired in 1892. 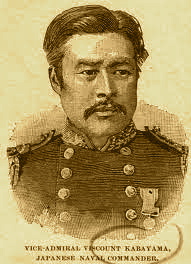 Kabayama was commander of the Japanese invasion force for Taiwan. On 10 May 1895, he was promoted to full admiral and became the first Japanese Governor-General of Taiwan, being responsible for moving the seat of government to Taipei. He was elevated to hakushaku (Count) on 5 August 1895 and also awarded the Order of the Rising Sun (first class).

Despite his best efforts to stabilize Japan’s rule over Taiwan, his 13 months term as Governor-General were not peaceful. From December 1895 to January 1896, uprisings surfaced in many parts of the island, and he was forced to request reinforcements from home. In the ensuing action, 2800 Taiwanese were killed. Kabayama was succeeded by Lieutenant General Katsura Tarō.

Kabayama retired again from duty in 1910. His grave is at the Somei Reien Cemetery, in Sugamo, Tokyo.