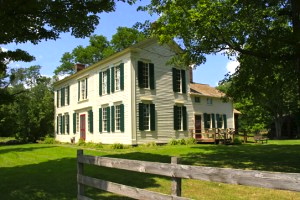 Millions of years ago there were no Catskill mountains that now dot the landscape of Delaware County.  A tectonic plate collision deformed the earth’s crust and evolved into the present Catskill mountains. Presently the highest place in Delaware County is located on its eastern part on the Dry Brook Ridge at an elevation of 3,460 feet. The major water routes through the County include the Susquehanna River which rises in Central New York State and flows along the Otsego/Delaware border. It touches the town of Sidney on the southwest Delaware County border eventually emptying in the Chesapeake Bay.

Century two reservoirs were built; the Pepacton on the East Branch; the Cannonsville on the West Branch. They are the source of much of the water supply for New York City. For the sportsman they are a mecca for trout fishermen.

In 1664 the Dutch surrendered New Netherlands to the English who renamed the area the Province or Colony of New York. By 1693 the Province was divided into 12 Counties. Land which later formed Delaware County was included in Ulster and Albany Counties. In 1708 Queen Anne of England granted the Hardenbergh Patent to Johannes Hardenberg and 7 other men. The total acreage involved in the Patent in Albany and Ulster Counties amounted to 1.5 million acres.

In 1754 the family of John and Abigail Harper left Connecticut with their nine children and came to the Otsego/Delaware border. By 1768 they moved into an area which is now called Harpersfield in Delaware County under their son, Col. John Harper who fought with the American colonists against the British during the Revolutionary War. This son, John, had attended the Wheelock school in Connecticut. A fellow classmate, Joseph Brant, a Mohawk Indian, led them against the Colonists since the Mohawks were one of the tribes of the Iroquois Confederation that sided with the British during Revolutionary War.

Four families of Dutch settlers who had lived in Hurley and Marblehead near Kingston, New York came up the Esopus Creek or as identified by the Indians as Shandaken Creek (meaning Swift Waters) in 1763 to the present town of Middletown near Arkville. During the Revolutionary War, the Mohawk Indian, Joseph Brant, had a meeting in the town of Unadilla and decided to attack the Arkville settlers. They came up the East Branch of the Delaware River with about 10 canoes filled with warriors. They were surprised to find that the families had already left the town hurrying to Kingston for safety. They had been alerted by another Indian, Tunis, who had been friendly with one of the families, the Yaples.

Earlier in this history the Delaware River was mentioned. It was the conduit for shipment of the great forests to the City of Philadelphia. While the earliest raftsman, Daniel Skinner, floated the first raft of spar timber to Philadelphia, just after the French and Indian War in 1764, it wasn’t until the decade 1875-1885 that it reached its peak. The Town of Middletown was the highest point on the East Branch of the Delaware for rafting and Walton was the highest point on its West Branch that they floated lumber. Walton was not a factor after the Civil War. The Town of Arena which is now under the waters of the Pepacton Reservoir was once called Lumberville because of the number of lumber rafts that left the village.

A major industry in early times which utilized the clean, clear water and the grasses of the Catskills was the dairy industry. Andes and Bovina were just two of the Towns whose firkins of butter were brought by horse and cart to Catskill, NY to be put on boats on the Hudson River to be sent to New York City and distribution to the Eastern States. Many of the Delaware County Towns said that it was their butter that was placed on the table of President Ulysees S. Grant when he resided in Washington, D.C.

Finally on March 10, 1797 Delaware County was formed from parts of Otsego and Ulster Counties. The towns of Franklin, Kortright, Harpersfield, Colchester, Middletown and Stamford comprised the Towns. The County seat was in Delhi. In the census of 1800 the population of Delaware County was 10,228 people.

Shortly after 1798 the County formed a Militia for protection. All white males between 18 and 45 years of age were required to serve. In the War of 1812 they were sent to defend Brooklyn Heights in New York City. Fortunately the war ended in a few months and they did not engage in battle. In the Civil War the involvement was much greater in numbers who served and those who sacrificed their lives. In 1861 when confronted with the entrance into the Civil War Delaware County formed I Company of the 72nd Infantry. When President Lincoln in July 1862 asked for 300,00 more men to enter the service, Delaware County responded by forming the 144th Infantry with companies A through K who served for a three year period.

Another War that should be mentioned is the “Anti-Rent War. It reflected the strong feelings that many farmers and others had regarding the lease system that goes back to the Patroon times that did not permit them ever to buy the land that they rented. Meetings were held throughout New York State but Delaware County became the hot bed of protest. A group of protestors formed into a group of “Calico Indians” who wore costumes with a head covering of painted sheepskin and a calico dress. Some carried horns. In 1845 the Under-Sheriff, Osman Steele, went to the house of Moses Earle, in Andes, New York to collect $ 64.00 the arrears of rent due from him. In anticipation of the action estimates from 200 to 360 Calico Indians were there to stop the action. Shots were fired and Osman Steele was hit and later died that day. Since the authorities could not identify who fired the shots, a total of 242 people were indicted for complicity for killing Steele. Two of the Calico Indians, were sentenced to be hung. A short while later the two men had their sentence commuted to life imprisonment. Governor Young in 1847 pardoned all the Anti-Rent convicts acting on a request from 11,000 petitioners.

At about this time the present constitution struck a fatal blow at the remnant of feudalism in New York State and abolished ” all feudal tenures of every description, with all their incidents” declaring that ” no lease or grant of agricultural land for a longer period than 12 years hereafter made, in which shall be reserved any rent or services of any kind, shall be valid.” These wise provisions were immediately the fruit of the Anti-Rent agitation.