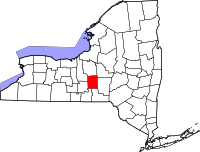 The surface of the county is made up of hilly ranges, broad, level plains, and an elevated plateau in the northern section with a ridge on the extreme north side which is the dividing point of the waters which flow to Lake Ontario and those which go to join the Susquehanna River. The highest peak in the county is Mt. Topping. The Truxton and Owego hills average about 2,000 feet above sea level, and the plateau about a thousand feet less. There is much good arable land in Cortland, with the more fertile, and first used, soils Iying in the valleys. After the great forests of hardwoods had been reduced, farming became the great industry and still stands at the head of the occupations of the county.On April 8, 1808, four and a half townships were taken from the county of Onondaga and erected as the new county of Cortland. The name was derived from that of the first Lieutenant-Governor of the State, General Pierre Van Courtlandt. The boundaries of the new county differed little from those of the present which are: On the north by Onondaga County; on the east by Madison and Chenango; on the south by Broome and Tioga; and on the west by Tompkins and Cayuga. It is about 26 miles in extent from north to south and 2o from east to west, having an area of 485 square miles.

The Tioughnioga is the main stream of the district, being the entry way in the early days and the main highway over which the products of the land were exported and the needed supplies brought in. As early as 1814 it was established by the Legislature as a public highway. To its waters came the settlers from all around, and scows and boats were loaded at Port Watson (now in the village of Cortland) and floated down the Chenango, thence to the Susquehanna to the Pennsylvania ports on this stream. The Indian seems to have loved the Tioughnioga, but for its fish and canoe waters, rather than for a home. Perhaps this was because the two tribes in this region could not trust each other. Tradition has it that the Lenapes had a town on the river near the present site of Homer, which was destroyed by the tricky Mingoes. The lakes, the Otselic Valley, the little streams which are found in all parts of CortIand not only drew the pioneer, but in these later days have attracted the summer visitor and the region is full of hotels and country homes of those who make the county their annual vacation place.

The settlement of Cortland County was relatively late, for there were no permanent residents before 1791. Joseph Beebe, his wife, and Amos Todd, his brother, built the first homes on the Tioughnioga in that year just north of Homer. The streams farther south had many small settlements by this time, but once knowledge of this up-river section became wide spread among the incoming immigrants, the increase of settlers was rapid. John Miller came to the site of the city of Cortland the next year; Joseph Chaplin to Marathon in the same year, in 1792, Thaddeus Rockwell in 1793. By 1797 there were more than a hundred people in the valley and by 1810 the population of the town of Homer was given as just short of three thousand.

Growth was manifested in other lines. In 1798 the first school was opened with Joshua Ballard as teacher, this school to be promptly followed by others in other sections. In Homer, in 1801, two church organizations were formed; there had been religious services held since 1794. A medical society was created in 1808. Meanwhile industries were being established, a gristmill in 1798 being the first, but a sawmill soon followed. Maple sugar, whiskey, gypsum, potash, was some of the industrial products shipped from the county before there was one.

Cortland County was erected in 1808, and the organization perfected that summer. In 1810 came the fight for the honor of being appointed the shiretown, with the village of Cortland the winner. Ephraim Fish represented the county as its first member of the Assembly. John Keep held the first court. The first county building was erected on Court House hill, a wooden structure with a steeple. The year was 1812 and the cost $l,600. The county was putting off its swaddling clothes and taking on the airs of a precocious child. It had arrived.

The War of 1812 had the same retarding effect upon the expansion of the district that it had on all the up-State counties of that day. Cortland ceased playing the child and became a mature man. There was little real set back but it was a period of settling down and finding itself. During this time a jail was built (1818) and a county clerk’s office erected; Road conditions were improved. The old State road of 1794 passed through the towns of Willett, Virgil and Marathon, to which was joined Cortland town in 1806. Then followed a decade of turnpikes, with stage routes established between the larger places. The Cortland to Syracuse stage road finished in 1850, had passenger coaches on it which would take one from one place to the other in six hours.

New industries came to the county in these years. In 1815 the first practical nail making machinery in the State was installed by William Smith in the rear of his sawmill. This was a self-feeding device that received the metal at one side and turned out perfect cut nails, all marked with an S, at the other. Sheep had been brought to the region and wool carding and weaving (knitting) had come into use in 1824. Paper mills were started about the same time; pottery in 1829, of clay brought from New Jersey by way of the rivers. An agricultural implement factory was established in 1832.

Nearly all of these developments were in the towns of Cortland and Homer.

A great impetus was given to the industrial life and growth of the county by the establishment of new and better systems of transportation. The turnpikes had, in a measure, displaced the Tioughnioga, and the river had been abandoned as a freight highway. The opening of the Erie Canal to the north in I829 hindered rather than helped Cortland, but the railroad in 1854, the Binghamton, Cortland and Syracuse, was medium of enlarged opportunity and growth. Other railroads soon followed, giving greater ease of access to the inhabitants of the outer regions, as well as to those within the snug county to wider markets. Until the railroad period, the growth within Cortland had been that of the slow establishment of clearing lands, starting industries, creation of schools and churches, in other words, the establishment of the foundations on which might safely be built the future prosperity. When the railroad came Cortland saw the most phenomenal expansion, in all respects, of its history.