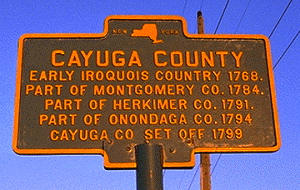 Situated in the heart of the “Finger Lake country,” about equidistant from Albany and Buffalo, Cayuga County is one of the longest and narrowest of the civil divisions of New York. It possesses, possibly, the widest variety of climate and the greatest variety of productions, both agricultural and manufactured, in the State. The north and south dimension is 55 miles; reaching down from Lake Ontario into the “Finger Lakes”; its width only averages about 14 miles; the area being 760 square miles. The land has a general slope from south to north, making for good drainage and frost protection.

The many large lakes, either located within its borders or on the boundaries, add to these advantages. The surface of the county is, as a rule, sufficiently level to permit of easy cultivation, and fertile enough to have attracted farmers since the very early days. The Seneca River is the principal stream, receiving, as it does, the waters that drain into the several lakes. With its tributaries, Owasco, Cold Spring, Cayuga, Crane and Bread creeks, it forms many water powers, many of which have been utilized. Geologically, there are few minerals of value, the only ones being mined, or quarried today are limestones and gypsum. Building stone and clays are the only other mineral products used to any extent. Agriculture is the main vocation of Cayuga, it still being what is called a rural county. But the increase in the number of factories, and the growing populations of the villages at the expense of the farms must not be overlooked.

Cayuga County was formed from Onondaga March 8, 1799. The first general division of the State into townships took place in 1789, and the towns of Aurelius and Milton were set up on January 27 of this year, being taken from Batavia. The title to the territory owned by the Holland Company in the present county was brought in February 25, 1789, and was being mapped or surveyed. When Cayuga was erected ten years later it contained of these surveyed townships, Aurelius, Victor, Milton, Scipio, and Sempronius; all names sprinkled out of the “Classical pepper pot” of Surveyor-General De Witt.

The first settlement in the present county was made in 1878 by Roswell Franklin at Aurora, but the subsequent influx of emigrants was rapid and great, for in 1800 there were more than 15,000 people in the new county. New York had provided bounty lands for 88 battalions of’ its Colonial soldiery, but these tracts lay in a part of the State which did not appeal to the owners, so they were for the greater part sold, the soldiers in question moving to the lake country, of which the returning army of Sullivan gave such glowing reports. The Onondaga military tract was one of the later soldier provisions and included Cayuga. In the meantime, the lands Iying to the west of the military tract had been sold to individuals, who offered inducements to prospective settlers. Only the difficulty of cutting the way through trackless forests stood in the way of the rapid colonization of the favored lakes district, but even this did not hold back the stream of pioneers which flowed into Cayuga.

The forming of the county in 1799 became necessary because the Cayuga section was outgrowing the mother county, or rather that part of it in which the courts were held. The population of Onondaga after the division was less than the part separated. There was, of course, a great race by the villages for the honor of being the county seat. None had been named, and for several years the first settlement, Aurora, centrally located, held the courts. But in 1804 a law was passed reducing the county to nearly its present size, and with the law was a provision for the establishing of Sherwood’s Corners as the shiretown. This latter provision met with great objection, since the hamlet was off the main lines of travel and too much to one side of the county. Although seven hamlets strove for the prize which the next Legislature awarded, it was Hardenburgh’s Corners that came out in the lead, and which was made the county seat in June of 1805.