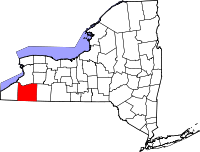 The rise, growth and history of Cattaraugus County are closely connected with the question of transportation. Located on the Pennsylvania line near the west border of New York, it was the only section with a navigable river leading out to the southwest country. The route down the smoothly flowing Allegheny and Ohio rivers was very attractive to those who wished to immigrate to Ohio and the nearby States.

The head of navigation was at the site of Olean, and it was from this point that the traveler entered his boat and made his way, without change, to his western destination. Naturally the first permanent settlement in the county was made at Olean in 1804, which quickly became a place of importance. In 1825 the Erie Canal was completed and the stream of immigration was diverted from the river route, and there followed a very dull period in the expansion of the county. But when the New York and Erie Railroad was completed in 1851, a new impetus was given to the growth, enterprise and industries of Cattaraugus, which was slow in losing its force.

The first white settlement in the county was made as the result of a mission to the Indians of the section by Quakers of Philadelphia. Joel Swane, Halliday Jackson and Henry Simmons were sent by the Friends, in 1798, to locate among the Senecas, which they did in the present town of South Valley. They tried to teach the Indians agriculture, and it is an interesting fact that they offered premiums for the growing of fine crops forty years before there were any such prizes given among whites.

Just after the close of the Revolution there were a number of books written in the most glowing language, describing the advantages of Western New York and particularly that section of it in which the county lies. These led to the so-called Holland Purchase in 1792-93, and the issuing of more boosting literature. Major Adam Hoops was the first to become interested in the lands of Cattaraugus, and to him was issued, in 1803, the first contract for a piece of land at the junction of Oil Creek (Olean Creek) with the Allegheny River, and here was started the earliest of the settlements which were soon after to dot the surface of the county.

The Indians had the final say so in the Holland transaction, and from the lands ceded to the Holland Company by the Six Nations in 1797, three reservations were made within the limits of Cattaraugus: The Oil Spring, one mile square; The Allegheny, forty-two square miles, extending along the Allegheny for twenty-five miles, with a width of two, containing the best of the farm lands of the county; and a small part of the Cattaraugus. The county as a whole has an area of 1,334 square miles, mostly uplands rather badly broken in character, with a multitude of small streams draining it and forming innumerable valleys.

Most of the streams furnished water power, and were thus valuable to the pioneers. As there were very heavy forests, these waterways greatly aided the getting out of the logs, or cut lumber. These forests have never been completely exhausted. Naturally this is a dairy region, with grazing in plenty, and sufficient lands suited to growing the grains needed for feeding stock. The soil and location in many parts are fitted for the production of fruits, and apples are one of the mainstays in the farming. Certain vegetable crops, including potatoes, are grown on a large scale.

The county was formed from Genesee, which in turn was taken from Ontario on March 11, 1808. Ellicottville, near the south center of the county, was chosen as the shiretown. But until I8I7 the county affairs were merged with Niagara, and the first court held in the county was at Olean, July 3, 1817. A court house was erected in Ellicottville before the end of the next year. These were burned in 1829, but promptly rebuilt. Little Valley was made the county seat in 1867.