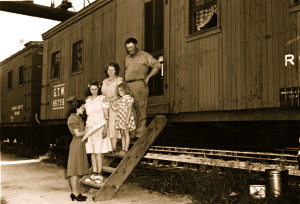 The Crash of 1929: The Great Depression

The Crash of 1929: The Great Depression – Documentary.

By: Cristian Salazar and Randy Herschaft, The Associated Press

It was a decade when tens of millions of people in the U.S. experienced mass unemployment and social upheaval as the nation clawed its way out of the Great Depression and rumblings of global war were heard from abroad.

Now, intimate details of 132 million people who lived through the 1930s will be disclosed as the U.S. government releases the 1940 census on April 2 to the public for the first time after 72 years of being kept confidential.

Access to the records will be free and open to anyone on the Internet — but they will not immediately be name-searchable.

For genealogists and family historians, the 1940 census release is the most important disclosure of ancestral secrets in a decade and could shake the branches of many family trees. Scholars expect the records to help draw a more pointillistic portrait of a transformative decade in American life.

Researchers might be able to follow the movement of refugees from war-torn Europe in the latter half of the 1930s; sketch out in more detail where 100,000 Japanese Americans interned during World War II were living before they were removed; and more fully trace the decades-long migration of blacks from the rural South to cities.

Photo: A woman operates a card puncher as part of an old tabulation system used by the U.S. Census Bureau to compile the thousands of facts. The National Archives will offer a digital release of data collected from the 1940 census on April 2. (U.S. National Archives/Public Domain).

More than 120,000 enumerators surveyed 132 million people for the Sixteenth Decennial Census — 21 million of whom are alive today in the U.S. and Puerto Rico, according to the U.S. Census Bureau.

Some of the most contentious questions focused on personal income and were deemed so sensitive they were placed at the end of the survey. Less than 300,000 people opted to have their income responses sealed.

In part because of the need to overcome a growing reluctance by the American public to answer questionnaires and fears about some new questions, the bureau launched its biggest outreach and promotional campaign up to that time, according to records obtained at the Franklin D. Roosevelt Presidential Library and Museum in Hyde Park.

It opened its first Division of Public Affairs to blanket the country with its message, reaching out to over 10,000 publications and recruiting public officials, clergy and business owners to promote it.

Movie studios were enlisted to encourage their film stars to participate, including Cesar Romero, who later played the Joker in the Batman television series. A photograph of President Franklin D. Roosevelt taking the census also was used for the campaign.

The bureau also hired the managing editor of “Opportunity: A Journal of Negro Life” to galvanize support in the black community. However, studies in the 1940s revealed undercounts, including 13 percent of draft-age black men.

In a first for the National Archives and Records Administration, the nation’s recordkeeper plans to post the entire census on the Internet — its biggest digitization effort to date.

That might be unsurprising given that increasingly popular online ancestry services make vast amounts of genealogical data available. But for previous decennial census releases, researchers had to trek to NARA branches to crank through microfilm machines.

Still, finding a name in the 3.8 million digitized images won’t be as easy as a Google search: It could be at least six months after the release before a nationwide name index is created.

In the meantime, researchers will need an address to determine a census enumeration district — a way to carve up the map for surveying — to identify where someone lived and then browse the records.

Some experts said enthusiasm for the release could be dampened by the lack of a name index, especially for novices.

“It may very well frustrate the newcomers,” said Thomas Macentee, an industry analyst helping recruit volunteers for a name indexing effort sponsored in part by the Mormon-run FamilySearch.com. “It’s like showing up on Black Friday. If you really want that TV set, if you really want that census record, you are going to be ready to go and you are going to keep at it no matter what.”

Publicly-traded Ancestry.com, which has over 1.7 million customers, is also working to make the census records searchable by indexing almost all fields and providing proprietary tools to mine the data.