You are here: Home / Colleges and Universities / Education / Thomas Jefferson 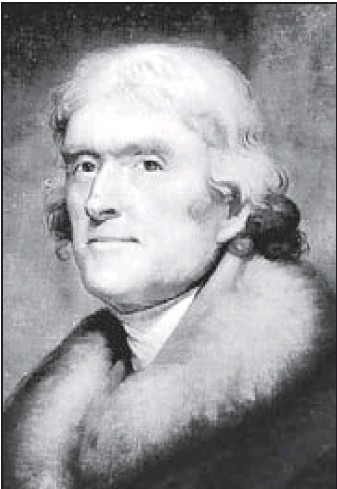 Nearly 300 years after his birth, the ideals set forth by Thomas Jefferson still guarantee Americans their freedom.

THOMAS JEFFERSON, the third president of the United States, is among the best known of the nation founding fathers, and among them, one of the most passionate advocates and defenders of liberty.

Jefferson drafted the Declaration of Independence, the document that declared the US independent from England in 1776, and first put forth the principle that equality, liberty and justice were the birthrights of all people.

The fundamental ideals of freedom and individual liberty upon which the US was founded, such as freedom of speech and freedom of religion, of equality, individual property rights and representative democracy, can all be traced to Thomas Jefferson.

Jefferson was also a strong advocate of states rights, being deeply suspicious and skeptical of a too-powerful central government. He saw the federal government as a necessary evil to keep the union of states together and to provide key and specific services, such as a military, for when the states had to function as a unified nation. He also opposed maintaining a standing military, believing that having armed soldiers available to the federal government threatened the individual liberty of citizens.

The accurate interpretation and application of Jeffersonian political theory remains a fundamental component to the ongoing debate about how the US should be governed.

Thomas Jefferson would be 268 years old today, and if he were alive, he may be surprised at how modern America is wrestling with the role the federal government.

In modern times, Thomas Jefferson has emerged as a controversial figure, because he was a southern plantation owner during the time of slavery in the US and he owned slaves.

He grew up on a plantation in Virginia, the son of a wealthy father and a mother of high social standing. He inherited land from his father, where he built his lifelong home, Monticello. He studied law and spent his entire career in public service, first in local government and then as a member of the Continental Congress, where he was selected by his colleagues to author the Declaration of Independence.

After serving in Congress, Jefferson returned to Virginia, where he served in the state legislature, authored Virginia first religious freedom law and was elected governor. He went on to serve in president George Washington cabinet, as a trade commissioner to France and then as ambassador to France.

He lost his first bid for the presidency by just four electoral votes to his friend John Adams, becoming vice president. He defeated Adams in the next election to become the third US president.

During his presidency, Thomas Jefferson brokered the Louisiana Purchase, the land deal in which the United States bought a great swath of the middle of the country from France, and made possible America westward expansion.
After his presidency, Jefferson returned to Virginia, retiring to his beloved Monticello. During his retirement, he established the University of Virginia.

He died on July 4, 1826, on the 50th anniversary of the signing of the Declaration of Independence.