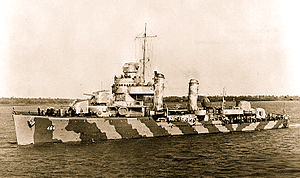 Sinking of the USS Hobson 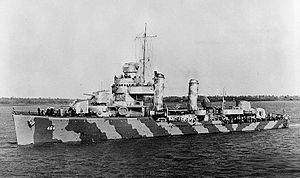 The USS Hobson off Charleston, South Carolina, March 4, 1942. She is painted in camouflage Measure 12 (Modified). This Photograph has been censorned to remove radar antenna her foremast and Mark 37 gun director.

USS Hobson (DD-464/DMS-26), a Gleaves-class destroyer, was the only ship of the United States Navy to be named for Richmond Pearson Hobson, who was awarded the Medal of Honor for actions during the Spanish-American War. He would later in his career attain the rank of Rear Admiral and go on to serve as a congressman from the state of Alabama.

Hobson (as DD-464) was launched at the Charleston Navy Yard, on 8 September 1941; sponsored by Mrs. R. P. Hobson, widow of Rear Admiral Hobson; and commissioned on 22 January 1942, Commander R. N. McFarlane in command. 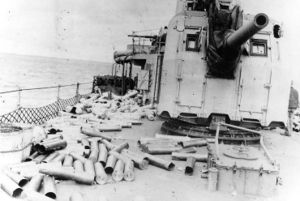 Expended cartridge cases and powder tanks from the ship’s 5″/38 guns litter the deck, after firing in support of the Normandy invasion off Utah Beach, June 6, 1944.  This view was taken on the ship’s afterdeck, with mount 54 at right.

The USS Hobson was built in the Charleston ship yard in South Carolina and was launched for the first time on September 8, 1941. The Hobson fought in various battles during World War II, including the invasion of Normandy. Following World War II, the Hobson was involved in fairly peaceful endeavors until the start of the Korean War. In the early 1950’s the Hobson was involved in two military exercises off the coast of Puerto Rico and North Carolina.

The Hobson is most known not for its military endeavors, but for a tragic incident involving another American ship. On April, 26 1952 the Hobson encountered the event that would lead it to fame. During the night, while most of the crew was sleeping, the captain of the Hobson, confused due to the darkness, gave the order to change course several times, unknowingly leading her straight into the path of another ship. The USS Wasp, a carrier, collided with the much smaller destroyer-minesweeper, the Hobson, near the Azores Islands in the Atlantic. The force caused the Hobson to roll and split in half, tossing the crew into the ocean. The ship lay beneath a blanket of water, at the bottom of the ocean within a total of four minutes. Of the 176 crew members who lost their lives, 150 were estimated to be sleeping at the time of the collision; never even given a chance at survival. The captain of theHobson, the most likely culprit of this disaster, went down with his ship. Following the crash, Waspcrewmembers, hastened to pull survivors from the wreckage. They managed to rescue 61 American military personnel from an eternal slumber at sea.

The sinking of the USS Hobson became one of the great tragedies of the Cold War. It led to the greatest amount of loss of American lives since World War II to that date. Americans realized that they were not always safe, and that dangers could be found in unexpected places. In the future, they had to become more prepared defensively.