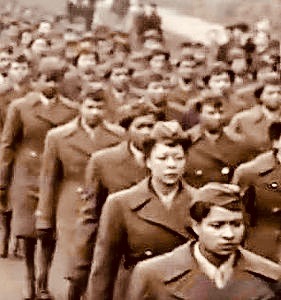 The 6888th Central Postal Directory Battalion was an all-black battalion of the Women’s Army Corps (WAC). The 6888th had 855 black women, both enlisted and officers, and was led by Major Charity Adams Earley. It was the only all-black, all-female battalion overseas during World War II. The group was nicknamed “Six Triple Eight” and their motto was “No mail, no morale”.

The battalion was organized into five companies, Headquarters, Company A, Company B, Company C, and Company D. Most of the 6888th worked as postal clerks, but others were cooks, mechanics and held other support positions, so that the 6888th was a self-sufficient unit.

During World War II, there was a significant shortage of soldiers who were able to manage the postal service for the U.S. Army overseas. In 1944, Mary McLeod Bethune worked to get the support of first lady, Eleanor Roosevelt, for “a role for black women in the war overseas.” Black newspapers, too, challenged the U.S. Army to “use black women in meaningful Army jobs.”

The women who signed up went to basic training in Georgia. Women who were already in the WAC, like Alyce Dixon, served at different locations, including the Pentagon, before they joined the 6888th.

Members of the 6888th Central Postal Directory Battalion march in a parade cememony in honor of Joan d’Arc at the marketplace where she burned at the stake in, May 27, 1945 (c. Lawrence E. Walker Foundation Collection)

The 6888th left the United States on February 3, 1945, sailing on Île de France and arriving in Glasgow on February 12. Île de Franceencountered several GermanU-boats on the trip, forcing the ship to take evasive maneuvers.  The same day the battalion was transported by train to Birmingham.,on 15 February, the battalion was inspected and marched in review before Lt. Gen. John C. H. Lee, Commanding General, Communications Zone, European Theater of Operations (ETO), and Maj Gen. Robert McGowan Littlejohn, Chief Quartermaster, ETO, part of whose command was mail.

Army officials believed that undelivered mail was “hurting morale.” Many letters and packages were difficult to source, as they were addressed with only the first name of the soldier, had a commonly used name or used nicknames.

Early in the operation, a white general attempted to send a white officer to “tell them how to do it right,” but Major Earley responded, “Sir, over my dead body, sir!” The battalion finished what was supposed to be a six-month task in three months in May 1945.

The 6888th devised their own system to handle the backlog of mail. The women of the 6888th worked in three different shifts, seven days a week, processing and delivering mail – a morale booster – to fighting troops in Europe. Each shift handled an estimated 65,000 pieces of mail.  It was cold when they arrived, and women wore long underwear and coats in the unheated buildings.

The 6888th was a segregated unit, sleeping and eating in different locations from the white, male soldiers. They were housed in a former school building, with officers quartered in houses nearby. Some women felt that European “locals” treated them better than people did in the United States.

A chaplain working at Birmingham caused problems for Earley, ordering her soldiers not to report to work, but to report to his office, causing them to be AWOL. Earley had to “‘counsel’ him to let the women alone,” reminding him that she was in charge of the women’s assignments (c. edited by Lawrence E. Walker). To read more go to the link below: