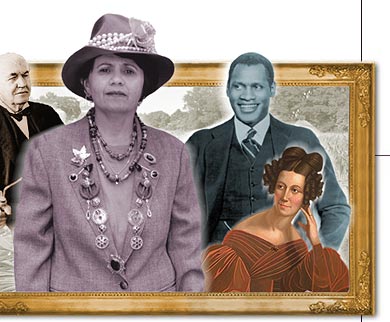 A tour of the Camden County Historical Society complex in Camden, New Jersey. A treasure house of the local history of the lower Delaware Valley, the Society has a museum, library and a restored 18th-century mansion.

1.  Port Black Point, and Oceanic were all in the area now known as?

2.  The Mid-Atlantic Regional Archives Conference (MARAC) is the regional Professional association for archivists.  The approximate number of MARAC members in New Jersey is?

3.  Spring Lake, formerly part of Wall Township, was incorporated as a separate town in?

4.  For whom or what was Wall Township named?

a.  Wall Street, because many stockbrokers originally bought the land

d.  A wall along the Shark River to prevent floods

e.  A storm wall on the Atlantic coast

5.  The New Jersey Historical Commission (NJHC) does all of the following except?

b.  Awards grants for history education, publications, and preservation of archival materials

a.  A duck-hunting boat that allows the hunter to lie flat in order to sneak up on the ducks

b. A box on the bottom of a wagon used to hide runaway slave on the Uniderground Railroad

c.  A container used to hold sneakers for ocean bathers in Asbury Park at the turn of the century

d.  An arcade novelty in which viewers counld see previews of their favorite moview stars during the silent-film era

e.  A special device used during elections by which unregistered voters counld sneak into the polls

7.  The community of Interiaken was named by its founders after a similar peninsula in?

8.  What do Nassau Hall at Princeton University, Christ Church in Shrewsbury, and St. Peter’s Church Freehold, all have in common?

a.  They were designed by the famous Philadelphia architect, Robert Smith

b.  They all have burned and have been reconstructed

c.  They were all built for use primarliy by Presbyterians

d.  None saw any action druing the American Revolution

e.  The Continental Congress met in all three buildings during the 1780’s

9.  Completed in 1939 by one of the most famous American artists of the twentieth century, Ben Shahn’s nural in the Roosevelt, New Jersey, public school?

a.  Depicts members of the International Ladies Garment Workers Union

b.  Includes a picture of Albert Einstein

e.  All of the above

10.  Married women in the eighteenth century, legally known as femmes couvertes, had few rights. Which of the following was something they could do?

a.  Vote in elections of public officials

b.  Buy and see property