You are here: Home / Contributing Writers / E-Books / The Faith of George W. Bush

The Faith of George W. Bush 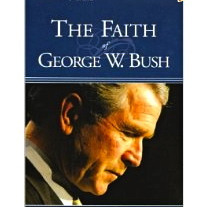 Stephen Mansfield is a writer and speaker best known for his groundbreaking books on the role of religion in history, leadership and modern culture. He first came to international attention with “The Faith of George W. Bush,” the New York Times bestseller that influenced Oliver Stone’s film W. His book “The Faith of Barack Obama” was another international bestseller. He has written celebrated biographies of Booker T. Washington, George Whitefield, Winston Churchill, and Abraham Lincoln, among others. Known for aggressively researching his books, Mansfield worked in a brewery while writing “The Search for God and Guinness” and was embedded with U.S. troops in Iraq to produce The Faith of the American Soldier.

Stephen speaks around the world on topics of faith, leadership and culture. He is also the founder of two firms, The Mansfield Group (MansfieldGroup.com) and Chartwell Literary Group (ChartwellLiterary.com). He is a frequent commentator on television news programs, a writer for a number of leading websites and an outspoken advocate for a variety of social causes. A single sentence from one of his books about religion in the Oval Office captures the guiding principle of his work: “If a man’s faith is sincere, it is the most important thing about him and… it is impossible to understand who he is and how he will lead without first understanding the religious vision that informs his life.”

Stephen lives in Nashville and Washington DC with his wife, Beverly, who is an award-winning songwriter and producer. For more information, log onto MansfieldGroup.com. 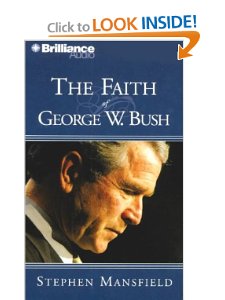 The first audiobook to explore the religious ideals that drive the policies and politics of Bush as president and that have privately shaped Bush as a man. His life demonstrates the power of faith to create change, to build a family and political career, and to shape the destiny of a nation with his leadership. This audiobook shows us how George W. Bush interjects his faith and belief in God into every detail of his life. From the President’s devotional time alone each morning to his frequent incorporation of Scripture into his speeches, Bush relies upon his faith to direct his actions and goals. From the tragedy of September 11th to the present-day conflict in Iraq, President Bush has learned to use his personal faith to help him live his life – both in office and in private. This audiobook will inspire others to do the same.