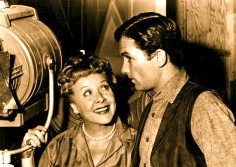 The Deputy – The Return of Widow Brown

Henry Fonda stars as Marshal Simon Fry in the Arizona Territory. Allen Ford co-stars as a storekeeping Deputy who is reluctant to use a gun. Norma Crane guest stars as Widow Brown. Watch westerns on http://www.westernmania.com. 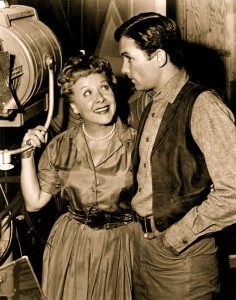 Allen Case as McCord on the set with guest star Vivian Vance, 1959

The Deputy is an American western series that aired on NBC from September 1959, to July 1961. The series stars Henry Fonda as Chief Marshal Simon Fry of the Arizona Territory and Allen Case as Deputy Clay McCord, a storekeeper who tried to avoid using a gun.

Fonda narrated most episodes and appeared briefly at the beginning and ending of most segments. He played the lead in only six episodes in the first season and thirteen in the second. Usually he would give his deputy the assignment and, on rare occasions, would thank him at the conclusion of the episode. As Fred MacMurray later did while shooting the sitcom series My Three Sons, Fonda performed all of his work on The Deputy in several lengthy sessions so as to leave himself free for other projects. The difference in quality between Fonda’s episodes and Case’s was often cited by both critics at the time and Fonda himself in later interviews. Fonda wore a growth of stubble on his face as Fry. 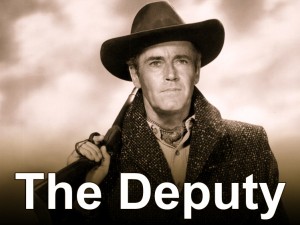 Though based in Silver City, the marshal’s district also covered several nearby towns. Deputy McCord was a storekeeper who bore arms with great reluctance. Wallace Ford starred as the elderly Marshal, Herk Lamson, with Betty Lou Keim as McCord’s sister, Fran, in the first season. Read Morgan joined the show in the second season as Sergeant Hapgood Tasker, known as “Sarge,” a one-eyed United States Army cavalry enlisted man stationed in town.

The series was created by Roland Kibbee and Norman Lear. It was produced by Revue Studios and featured a jazz guitar score by Jack Marshall.