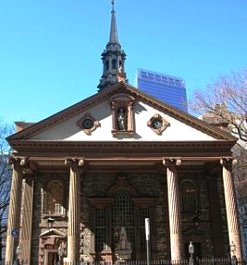 St. Paul’s Chapel, is an Episcopal chapel located at 209 Broadway, between Fulton and Vesey Streets, in Lower Manhattan in New York City. It is the oldest surviving church building in Manhattan. 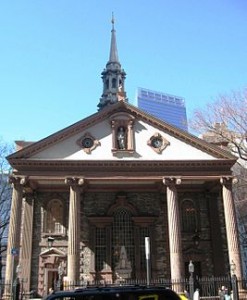 St. Paul’s Chapel, is an Episcopal chapel located at 209 Broadway, between Fulton and Vesey Streets, in Lower Manhattan in New York City. It is the oldest surviving church building in Manhattan.

A chapel of the Parish of Trinity Church, St. Paul’s was built on land granted by Anne, Queen of Great Britain, designed by architect Thomas McBean and built by master craftsman Andrew Gautier. Upon completion in 1766, it stood in a field some distance from the growing port city to the south. It was built as a “chapel-of-ease” for parishioners who thought the Mother Church inconvenient to access.

Built of Manhattan mica-schist with brownstone quoins, St. Paul’s has the classical portico, boxy proportions and domestic details that are characteristic of Georgian churches such as James Gibbs‘ London church of St Martin-in-the-Fields, after which it was modelled. Its octagonal tower rises from a square base and is topped by a replica of the Choragic Monument of Lysicrates (c. 335 BC).

Inside, the chapel’s simple elegant hall has the pale colors, flat ceiling and cut glass chandeliers reminiscent of contemporary domestic interiors. In contrast to the awe-inspiring interior of Trinity Church, this hall and its ample gallery were endowed with a cozy and comfortable character in order to encourage attendance. 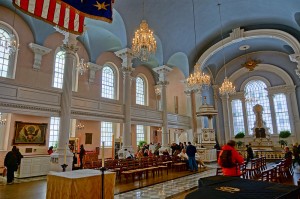 On the Broadway side of the chapel’s exterior is an oak statue of the church’s namesake, Saint Paul, carved in the American Primitive style. Below the east window is the monument to Brigadier General Richard Montgomery, who died at the Battle of Quebec (1775) during the American Revolutionary War. In the spire, the first bell is inscribed “Mears London, Fecit [Made] 1797.” The second bell, made in 1866, was added in celebration of the chapel’s 100th anniversary.

The building was declared a National Historic Landmark in 1960, in part because it is the oldest public building in continuous use in New York City.  The chapel survived the Great New York City Fire of 1776 when a quarter of New York City (then confined to the lower tip of Manhattan), including Trinity Church, burned following the British capture of the city after the Battle of Long Island during the American Revolutionary War. 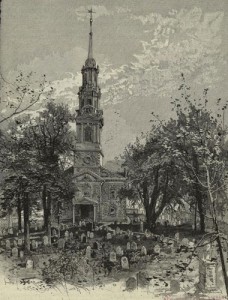 The Hearts of Oak, a militia unit organized early in the American Revolutionary War, and comprised in part of King’s College (later, Columbia University) students, would drill in the Chapel’s yard before classes nearby. Alexander Hamilton was an officer of this unit.

The chapel contains several monuments and memorials that attest to its elevated status in early New York: a monument to Richard Montgomery(hero of the battle of Quebec) sculpted by Jean-Jacques Caffieri (1777),George Washington‘s original pew and a Neo-Baroque sculpture called “Glory” designed by Pierre L’Enfant, the designer of Washington, D.C. Thepulpit is surmounted by a coronet and six feathers, and fourteen original cut-glass chandeliers hang in the nave and the galleries. 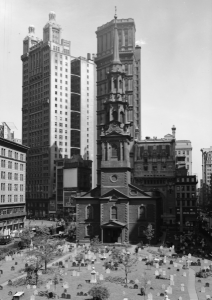 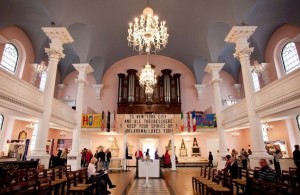 The church survived without even a broken window. Church history declares it was spared by a miracle sycamore on the northwest corner of the property that was hit by debris. The tree’s root has been preserved in a bronze memorial by sculptor Steve Tobin. While the church’s organ was badly damaged by smoke and dirt, the organ has been refurbished and is in use again.

The fence around the church grounds became the main spot for visitors to place impromptu memorials to the event. After it became filled with flowers, photos, teddy bears, and other paraphernalia, chapel officials decided to erect a number of panels on which visitors could add to the memorial. Estimating that only 15 would be needed in total, they eventually required 400.

Rudolph Giuliani gave his mayoral farewell speech at the church on December 27, 2001.

The Chapel is now a popular tourist destination since it still keeps many of the memorial banners around the sanctuary and has an extensive audio video history of the event. There are a number of exhibits in the Chapel. The first one when entering is “Healing Hearts and Minds”, which consists of a policeman’s uniform covered with police and firefighter patches sent from all over the country, including Iowa, West Virginia, California, etc. The most visible is the “Thread Project,” which consists of several banners, each of a different color, and woven from different locations from around the globe, hung from the upper level over the pews.