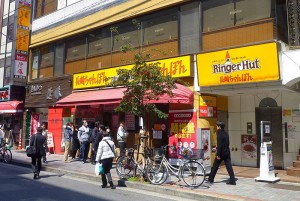 A branch in Ochanomizu, Tokyo.

Ringer Hut (リンガーハット?) is a Japanese chain of fast-food restaurants, specializing in Nagasaki dishes Champon and Sara udon. The chain was named after Frederick Ringer, a British merchant who made great contributions to trade and industrial promotion in Nagasaki during the late 19th to early 20th century. Ringer Hut operates over 550 Ringer Hut restaurants in Japan, Taiwan, and San Jose, California along with 100 Hamkatsu Restaurants (Tonkastsu restaurant chain).  Ringer Hut has two headquarters located in Fukuoka and Tokyo.

Ringer Hut is famous for the Nagasaki-style noodle dish known as champon. Champon is a Japanese word meaning “Blend”. Consuming champon provides a well-balanced and nutritional meal in itself. It has six garden-fresh vegetables (cabbage, carrot, bean sprouts, green peas, green onion and onion), shrimp, calamari, fish cake and meat with healthy noodles made fresh daily from a special blend of flours. Another signature dish is Nagasaki Saraudon that resembles the Thai-Chinese noodle dish rad naa. Saraudon are golden all-natural noodles made of a special blend of flours. The flavors of these noodles cannot be found anywhere else in the world. The thin crispy noodles are topped with a rich and hearty secret sauce. The secret sauce is made from fresh vegetables and chicken.

Fredrick Ringer was born in 1838 and died in 1907. He was a British merchant who became a leader in the Nagasaki foreign settlement. Within Glover Garden Park located in Nagasaki, Japan is the Ringer House. The Ringer House was built in 1865 for Fredrick Ringer. Fredrick Ringer spent most of his life in Japan; however he was born in Norwich. Over the course of his life, Fredrick Ringer made significant contributions towards the development of Nagasaki and Japan. His major accomplishments include the development of a mechanical flour mill, petroleum storage, a steam laundry among other things. In the 1890s Nagasaki was considered a boomtown and Fredrick Ringer was considered an influential foreign merchant. In 1897, Fredrick Ringer created the Nagasaki Press, a newspaper written in the English language. To further enhance his legacy in Nagasaki, he saw to the construction of a lavish four story hotel that included; electricity, telephones, a French chef situated on the water front in 1898. To his honor, The Ringer Hut chain of food restaurants was named after him .

A joint venture between Ringer Hut and frozen food maker Katokichi Co ended Nov 01, 2003. The joint 100-million yen venture began in August 2002. Ringer Hut was the primary investor by investing 70 percent to Katokichi 30 percent. Ringer Hut in China became an independent whole subsidiary by purchasing all stakes owed by Katokichi. The company began their venture by opening their first restaurant in November 2002, and their second restaurant was opened in December of the same year. Within six months, the restaurants recorded significant losses. As a result, Ringer Hut returned the menu to the traditional Japanese style menus. The changes to the menu resulted in a reduced contribution from Katokichi. Ringer Hut closed one of their China restaurants in December 2003. The restaurant closure resulted in a 36 million yen loss for Ringer Hut Co. The total deficit for the business year is estimated at 670 million yen.