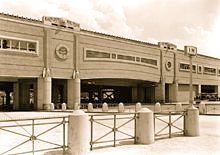 Puritan beginnings of the city along the Passaic River, Penn Station 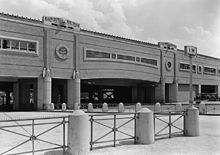 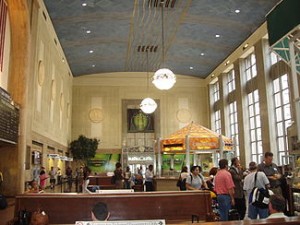 Designed by the renowned architectural firm McKim, Mead and White, the station is a mixture of Art Deco and Neo-Classical. The interior of the main waiting room has medallions illustrating the history of transportation, from wagons to steamships to cars and airplanes. The current building was dedicated on March 23, 1935; the first regular train to use it was a New York–Philadelphia express at 10:17 on March 24.  The new station was built alongside to the northwest of the old station, which was then demolished and replaced by the southeast half of the present station, completed in 1937. Except for the separate, underground Newark Light Rail station, tracks are elevated above street level.

It was built to be one of the centerpieces of the former Pennsylvania Railroad‘s (PRR’s) train network, and to become a transfer point to the Hudson and Manhattan Railroad (now PATH), which was partially funded by the PRR, for travel to lower Manhattan. At the time, PRR operated 232 weekday trains (both directions) between Newark and New York Penn Station; after 1937, the 10-mile trip took an average of 16 minutes.

The station, the adjacent 230-foot Dock Bridge over the Passaic River (the longest three-track railway lift span in existence), the Newark City Subway extension and the realignment of the H&M cost $42 million, borne almost evenly by the PRR and the City of Newark. PRR and H&M were moved to the station on June 20, 1937, and the nearby Manhattan Transfer station and H&M Park Place and original Harrison stations were closed. 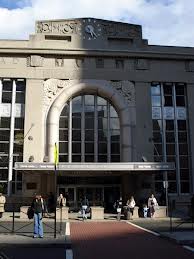 It is the west end of the Newark – World Trade Center line of the PATH, operated by the Port Authority of New York and New Jersey.

On the lower level is the south end of the Newark Light Rail to Newark Broad Street Station and downtown Newark.

As of April 3, 2011 the public timetables showed 188 weekday trains westward from Newark: 106 NJ Transit from New York Penn, 5 NJ Transit from Hoboken, 26 originating NJ Transit to the CNJ main line to Raritan/High Bridge, and 51 Amtrak (plus the triweekly Cardinal).

Newark Penn has eight tracks (not including Newark Light Rail). Seven are on one level: PATH trains from Manhattan arrive on an upper-level track with a platform on the west side.