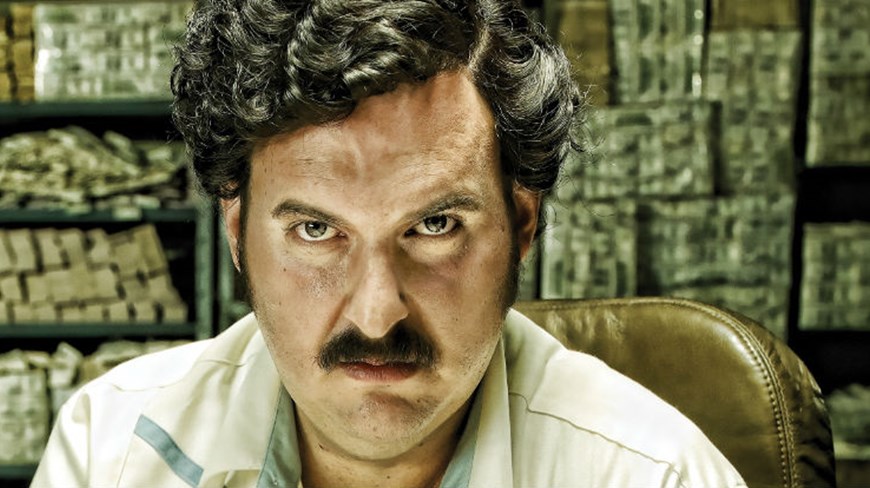 Pablo Emilio Escobar Gaviria (December 1, 1949 – December 2, 1993) was a Colombian drug lord. He was an elusive cocaine trafficker and a rich and successful criminal.   In 1983, he had a short-lived career in Colombian politics.

In The Accountant’s Story, Pablo’s brother, Roberto Escobar, discusses how Pablo rose from poverty and obscurity to become one of the wealthiest men in the world. At the height of its power, the Medellín drug cartel was smuggling 15 tons of cocaine a day, worth more than half a billion dollars, into the United States. According to Roberto, Pablo’s accountant, he and his brother’s operation spent $2500 a month just purchasing rubber bands to wrap the stacks of cash—and since they had more illegal money than they could deposit in the banks, they stored the bricks of cash in their warehouses, annually writing off 10% as “spoilage” when the rats crept in at night and nibbled on the hundred dollar bills.

In 1975, Escobar started developing his cocaine operation. He even flew a plane himself several times, mainly between Colombia and Panama, to smuggle a load into the United States. When he later bought 15 new and bigger airplanes (including a Learjet) and 6 helicopters, he decommissioned the plane and hung it above the gate to his ranch at Hacienda Napoles. His reputation grew after a well known Medellín dealer named Fabio Restrepo was murdered in 1975 ostensibly by Escobar, from whom he had purchased 14 kilograms. Afterwards, all of Restrepo’s men were informed that they now worked for Pablo Escobar. In May 1976 Escobar and several of his men were arrested and were found in possession of 39 pounds (18 kg) of white paste after returning to Medellín with a heavy load from Ecuador. Initially, Pablo tried unsuccessfully to bribe the Medellín judges who were forming the case against him. Instead, after many months of legal wrangling Pablo had the two arresting officers bribed and the case was dropped. It was here that he began his pattern of dealing with the authorities by either bribing them or killing them   Roberto Escobar maintains Pablo fell into the business simply because contraband became too dangerous to traffic. There were no drug cartels then and only a few drug barons, so there was plenty of business for everyone. In Peru, they bought the cocaine paste, which they refined in a laboratory in a two-story house in Medellín. On his first trip, Pablo bought a paltry £30 worth of paste in what was to become the first step towards the building of his empire. At first, he smuggled the cocaine in old plane tires and a pilot could earn as much as £500,000 a flight depending on how much he could smuggle.

Soon the demand for cocaine was skyrocketing in the United States and Pablo organized more smuggling shipments, routes, and distribution networks in South Florida, California and other parts of the USA. He and Carlos Lehder worked together to develop a new island trans-shipment point in the Bahamas, called Norman’s Cay. Carlos and Robert Vesco purchased most of the land on the Island which included a 3,300 foot airstrip, a harbor, hotel, houses, boats, aircraft and even built a refrigerated warehouse to store the cocaine. From 1978–1982, this was used as a central smuggling route for the Medellín Cartel. (According to his brother’s account, Pablo did not purchase Norman’s Cay. It was, instead, a sole venture of Carlos Lehder.) Escobar was able to purchase the 7.7 square miles (20 km2) of land, which included Hacienda Napoles, for several million dollars. He created a zoo, a lake and other diversions for his family and organization.   At one point it was estimated that 70 to 80 tons of cocaine were being shipped from Colombia to the U.S. every month. At the peak of his power in the mid-1980s, he was shipping as much as 11 tonnes per flight in jetliners to the United States (the biggest load shipped by Pablo was 23,000 kg mixed with fish paste and shipped via boat, this is confirmed by his brother in the book Escobar). In addition to using the planes, Pablo’s brother, Roberto Escobar, said he also used two small remote-controlled submarines as a way to transport the massive loads (these subs were, in fact, manned and this is again documented in Roberto’s book).

In 1982, Escobar was elected as a deputy/alternative representative to the Chamber of Representatives of Colombia’s Congress, as part of the Colombian Liberal Party.   During the 1980s, Escobar became known internationally as his drug network gained notoriety; the Medellín Cartel controlled a large portion of the drugs that entered into the United States, Mexico, Puerto Rico, and the Dominican Republic with cocaine brought mostly from Peru and Bolivia, as Colombian coca was initially of substandard quality. Escobar’s product reached many other nations, mostly around the Americas, although it is said that his network reached as far as Asia.

Corruption and intimidation characterized Escobar’s dealings with the Colombian system. He had an effective, inescapable policy in dealing with law enforcement and the government, referred to as “plata o plomo,” (literally silver or lead, colloquially [accept] money or [face] bullets). This resulted in the deaths of hundreds of individuals, including civilians, policemen and state officials. At the same time, Escobar bribed countless government officials, judges and other politicians. Escobar was allegedly responsible for the murder of Colombian presidential candidate Luis Carlos Galán, one of three assassinated candidates who were all competing in the same election, as well as the bombing of Avianca Flight 203 and the DAS Building bombing in Bogotá in 1989. The Cartel de Medellín was also involved in a deadly drug war with its primary rival, the Cartel de Cali, for most of its existence. It is sometimes alleged that Escobar backed the 1985 storming of the Colombian Supreme Court by left-wing guerrillas from the 19th of April Movement, also known as M-19, which resulted in the murder of half the judges on the court. Some of these claims were included in a late 2006 report by a Truth Commission of three judges of the current Supreme Court. One of those who discusses the attack is “Popeye”, a former Escobar hitman. At the time of the siege, the Supreme Court was studying the constitutionality of Colombia’s extradition treaty with the U.S. Roberto Escobar stated in his book, that indeed the M-19 were paid to break into the building of the supreme court, and burn all papers and files on Los Extraditables – the group of cocaine smugglers who were under threat of being extradited to the US by their Colombian government. But the plan backfired and hostages were taken for negotiation of their release, so Los Extraditables were not directly responsible for the actions of the M-19.