National Museum of African Art, 30 years as a Smithsonian Museum

Enjoy this overview as we grow from a small, local museum to a Smithsonian museum. 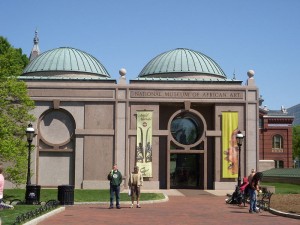 The National Museum of African Art

Is an African art museum located in Washington, D.C., United States. The museum is one of nineteen under the wing of the Smithsonian Institution. The museum, which was started in 1964, was originally located at the Frederick Douglass House in the Capitol Hill neighborhood of Washington, D.C.

In 1979 the museum was transferred over to the Smithsonian and relocated to the National Mall. It opened in its current location, as one of two institutions, constructed mostly underground, in the quadrangle complex behind the Smithsonian Institution Building (the Castle), in 1987. The other is the Arthur M. Sackler Gallery for Asian art.

In 1964, Warren M. Robbins founded the Museum of African Art.  It was a privately funded African art museum at the Frederick Douglass House, in Washington, D.C. Robbins owned the building.  A former American Foreign Services officer, Robbins was the first museum director. The museum showcased traditional African art and had educational programs about African art and culture.  The museum consisted of nine row homes with twelve galleries, a library and a small auditorium.  Robbins, who collected African art while serving overseas, sought to “foster an understanding African art in the U.S.”  The museum grew to have an annual budget of $900,000. Robbins and staff approached the government in 1976 asking the Smithsonian Institution to acquire the museum.

On October 5, 1978, the US Congress authorized the Smithsonian Institution to acquire the museum.  The transfer ended on August 13, 1979.  Approximately eight thousand objects were transferred to the Smithsonian. In 1981 the museum was renamed the National Museum of African Art.

Two years later, in 1986, the house complex was sold and the collections were transferred to the Smithsonian at the National Mall. The museum opened in a new building constructed in the quadrangle complex behind the Smithsonian Institution Building on September 28, 1987.  That same month, a donation of $200,000 was given by an anonymous donor to the museum. On behalf of the donation, the museum library was renamed the Warren M. Robbins Library.

Sylvia H. Williams was selected as the director of the museum in 1983, making the museum the first Smithsonian museum to have a female director.  She retained her position as director until her death in 1996.  After Williams’ death, assistant director Patricia L. Fiske stepped in as acting director.  Art historian and curator Roslyn Walker was named director on January 15, 1997 and Fiske returned to her role as assistant director.  Sharon Patton also served as director.

In November 2013, the government of Oman donated $1.8 million to the museum. The donation will fund a major new exhibition, “Connecting the Gems of the Indian Ocean: From Oman to East Africa”, cross-cultural influences on the arts in East Africa, North Africa, and the Middle East. Omani arts will also be a focus of the exhibit. The donation is the largest in the museum’s history.

The National Museum of African Art is located in the quadrangle complex on the grounds of the National Mall behind the Smithsonian Institution Building. It shares the complex space with the Arthur M. Sackler Gallery and the S. Dillon Ripley International Center.  Congress contributed $960,000 to fund the building of the complex.  Groundbreaking for the quadrangle took place on June 21, 1983.  The complex, designed by Jean Paul Carlhian, is ninety-six percent underground and has the Enid A. Haupt Garden as its rooftop. The museum, gallery and center are connected via underground tunnels. The underground buildings have design elements which were inspired by the Smithsonian Institution Building, the Freer Gallery of Art and the Arts and Industries Building. 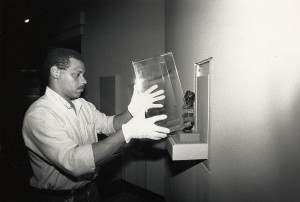 Exhibits Specialist Steve Smith placing a plexiglass case over an artifact in the museum. 1987.

When the National Museum of African Art was first transferred to the Smithsonian, the collection consisted of approximately 8,000 objects.  Today, the museum holds approximately 9,000 objects.  The museum’s collection is the largest publicly held collection of African art in the United States. The museum is given approximately sixty-seven gifts per year.  When the museum was located at the Frederick Douglass townhome, it exhibited nineteenth-century paintings created by black artists, objects once owned by Frederick Douglass, and some loaned African art pieces.

The current collection consists of musical instruments, sculpture, jewelry, regalia, textiles, early maps, educational materials, a library, and films, slides and photographs. The Warren M. Robbins Library houses more than 32,000 volumes about African art and culture.  In 1996, the Washington Post said “there is no more important research facility in America for the study of African art.”

Exhibitions at the museum focus on African art and culture. Exhibitions are designed in house and are also brought in from other organizations. Early exhibitions were held at the museums first home, the Frederick Douglas house located in the Capitol Hill neighborhood of Washington. Ethiopia: The Christian Art of an African Nation, was held in 1984.  The last exhibition held at the house was A Human Ideal in African Art/Bamana Figurative Sculpture.

After the museum moved to its current location, its exhibition space was broken up by African regions: Western Sudan, Guinea Coast, Cameroon, Ogowe River Basin, Lower Congo, Northeastern Zaire, the eastern Congo Basin, and southern and eastern Africa, which have quite different cultures organized around language and ethnic groups.

In the winter of 1997 the museum explored the importance of adinkra cloth in the exhibition A King and His Cloth: Asantehene Agyeman Prempeh I.  Mami Wata made an appearance in the 2009 exhibition Mami Wata: Arts for Water Spirits in Africa and Its Diasporas.

In Spring of 2012, Lalla Essaydi was the focus of the solo exhibition: Lalla Essaydi: Revisions. The exhibition showcased Essaydi’s photographs of Moroccan women, including her, to help fight stereotypes of Islamic women.

According to the museum, “The Smithsonian’s National Museum of African Art fosters the discovery and appreciation of the visual arts of Africa, the cradle of humanity.” 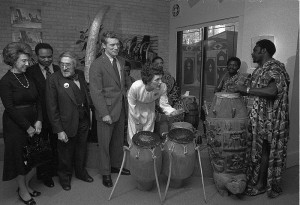 The museum’s educational program focuses on educating visitors about African art with objects from the collection and with programming such as lectures and workshops.

The National Museum of African Art has fostered numerous relationships with other museums in the United States, including the African American Museum in Philadelphia and the University of Pennsylvania Museum of Archaeology and Anthropology. The partnerships intend to improve the quality of exhibitions and care of collections.

The museum has hosted “artists in residence” and performances by musicians. Every year the museum organizes “Africa Underground,” four times a year. The event, developed by director Johnetta Cole, attracts new users to the museum. Live musical acts are featured playing Afrobeat music, as are artists, performers and other live entertainment. The event focuses on a specific part of African culture.