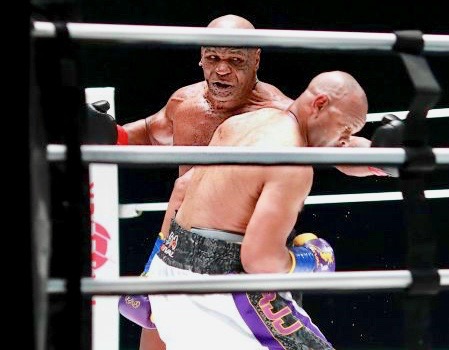 Ahead of Saturday’s exhibition fight between boxing legends Mike Tyson and Roy Jones Jr., it was impossible to predict what would happen in the ring. At a combined 105 years of age and with uncertainty over the rules ahead of the event, an already unpredictable situation felt even harder to figure out. But once the men got in the ring, they went as hard as could be asked for over eight, two-minute rounds leading to a split draw on the WBC-assigned judges scorecards.

The fight was a little rough around the edges, with neither man committing to a true volume of strikes. Neither seemed to throw more than or two punches at a time before ending up in the clinch to be broken up by referee Ray Corona. Tyson occasionally landed his trademark left hook at a distance while Jones showed flashes of his old self with no-look jabs and showboating to boot. To read more go to the link below: