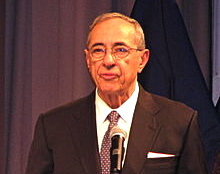 Mario Cuomo, the three term governor of New York died January 1st. His legacy continues with his son Andrew Cuomo and his ideals and beliefs no better shown in his 1984 Democratic National Convention Speech. 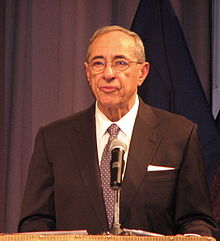 Cuomo was known for his liberal views and public speeches, particularly his keynote speech at the 1984 Democratic National Convention where he criticized Ronald Reagan’s policies. The speech brought him to national attention, and he was widely considered a front-runner for the Democratic nomination for President in both 1988 and 1992, but he declined to seek the nomination in both instances. His legacy as a reluctant standard-bearer for the Democrats in presidential elections led to him being dubbed “Hamlet on the Hudson.”

Cuomo was defeated for a fourth term as Governor by George Pataki in the Republican Revolution of 1994, and he subsequently retired from politics. He was the father of five, including Andrew Cuomo, the current Governor of New York, and journalist Chris Cuomo, currently at CNN.

He died of natural causes due to heart failure in Manhattan, New York City, on New Year’s Day, 2015. 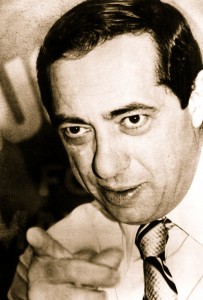 Cuomo was born in the Briarwood section of the New York City borough of Queens to a family of Italian origin. His father, Andrea Cuomo, was from Nocera Inferiore, Italy, and his mother, Immaculata (née Giordano), was from Tramonti, Campania. The family owned a store in South Jamaica, Queens, in New York City.

Cuomo attended New York City P.S. 50 and St. John’s Preparatory School. Cuomo was a baseball player, and while attending St. John’s University in 1952, he signed as an outfielder with the Pittsburgh Pirates for a $2,000 signing bonus, which he used to help purchase the engagement ring for his wife, Matilda. With teammate Fred Green Cuomo played for the Brunswick Pirates of the Class D Georgia-Florida League, with a .244 batting average until he was struck in the back of the head by a pitch. Batting helmets were not required equipment, and Cuomo was hospitalized for six days.

After the injury Cuomo gave up playing baseball and returned to St. John’s, earning his bachelor’s degree in 1953. Deciding on a legal career, Cuomo attended St. John’s University School of Law, from which he graduated tied for first in his class in 1956. Cuomo clerked for Judge Adrian P. Burke of the New York Court of Appeals. Despite having been a top student, when he applied to law firms, the ethnic prejudice of the time led to his rejection by more than 50 before he was hired by a small but established office in Brooklyn. In addition to practicing law, Cuomo was an adjunct professor at St. John’s Law School.

Cuomo first became widely known in New York City in the late 1960s when he represented “The Corona Fighting 69,” a group of 69 home-owners from the Queens neighborhood of Corona, who were threatened with displacement by the city’s plan to build a new high school. He later represented another Queens residents group, the Kew Gardens-Forest Hills Committee on Urban Scale, who opposed Samuel J. LeFrak’s housing proposal adjacent to Willow Lake in Queens. In 1972, Cuomo became known beyond New York City when Mayor John Lindsay appointed him to conduct an inquiry and mediate a dispute over low-income public housing slated for the upper-middle-class neighborhood of Forest Hills. Cuomo described his experience in that dispute in the book Forest Hills Diary, and the story was retold by sociologist Richard Sennett in The Fall of Public Man.

In 1974, he ran for Lieutenant Governor of New York on a ticket headed by gubernatorial candidate Howard J. Samuels, and both won the designation of the Democratic State Committee at the party convention. But their entire ticket, including the nominees for attorney general and U.S. Senator, was defeated in the Democratic primary election: Samuels by Rep. Hugh Carey of Brooklyn, and Cuomo by State Senator Mary Anne Krupsak, the first woman to be nominated for statewide office in New York. After Carey and Krupsak were elected, the new governor appointed Cuomo Secretary of State of New York in January 1975. 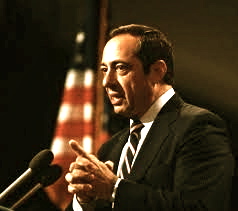 Two years later, Cuomo ran for Mayor of New York City at Carey’s urging. Incumbent Mayor Abraham Beame was very unpopular and Cuomo was one of five major challengers to Beame in the Democratic primary. In a close and highly fractured election, U.S. Representative Ed Koch finished first with 19.81% of the vote and Cuomo came second with 18.74%. As no candidate cleared 40% of the vote, Koch and Cuomo advanced to a runoff. Koch emerged victorious with 54.94% of the vote to Cuomo’s 45.06%. Cuomo had received the nomination of the Liberal Party several months previously and was urged to drop out of the race but he contested the general election against Koch and token Republican opposition.

During the mayoral campaign, placards appeared saying: “Vote for Cuomo, not the homo” in reference to rumours about Koch’s sexuality. Cuomo denied responsibility for this, but Koch never forgave him “as he made clear with a pointedly disparaging reference to Mr. Cuomo in a recorded interview with The New York Times that was not to be made public until Mr. Koch’s death.” Cuomo ran on his opposition to the death penalty, which backfired amongst New Yorkers as crime was very high. Cuomo then went negative with ads that likened Koch to unpopular former mayor John Lindsay. Meanwhile, Koch backers accused Cuomo of antisemitism and pelted Cuomo campaign cars with eggs. Cuomo was also defeated by Koch in the general election, taking 40.97% to Koch’s 49.99%. The race is discussed in Jonathan Mahler’s book Ladies and Gentlemen, the Bronx Is Burning.

In 1978, incumbent Lieutenant Governor Krupsak declined to seek re-election. She had previously committed to doing so but became upset with how Governor Carey treated her in office and felt she was not given enough to do. She withdrew from the ticket and unsuccessfully challenged Carey in the gubernatorial primary, accusing him of incompetence. Cuomo easily won the primary for Lieutenant Governor and was elected alongside Carey in the general election. 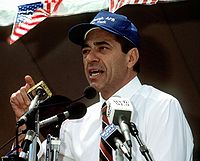 Governor Cuomo speaking at a rally in 1991

In 1982, Carey declined to run for re-election and Cuomo declared his candidacy. He once again faced Ed Koch in the Democratic primary. This time, Koch’s support for the death penalty backfired and he alienated many voters from outside New York City when, in an interview with Playboy magazine, he described the lifestyle of both suburbia and upstate New York as “sterile” and lamented the thought of having to live in “the small town” of Albany as Governor, saying it was “a city without a good Chinese restaurant.” Cuomo won the primary by ten points and faced Republican nominee businessman Lewis Lehrman in the general election. With the recession aiding Democratic candidates, Cuomo beat Lehrman 50.91% to 47.48%.

Cuomo actively campaigned for Walter Mondale in the 1984 presidential election, and was named on Mondale’s list of vice presidential candidates. Geraldine Ferraro was ultimately nominated as his running mate, but Cuomo was chosen to give the keynote speech at the 1984 Democratic National Convention in San Francisco. He vigorously attacked Ronald Reagan’s record and policies in a speech that brought him to national attention, most memorably saying: “There is despair, Mr. President, in the faces that you don’t see, in the places that you don’t visit, in your shining city.” He was immediately considered to be one of the frontrunners for the Democratic nomination for President in 1988 and 1992.

Cuomo was re-elected in a landslide in 1986 against Republican nominee Andrew P. O’Rourke by 64.3% to 31.77%. He consistently ruled out the possibility of running in the 1988 presidential election, announcing on February 19, 1987, that he would not run and then going on to publicly decline draft movements in the wake of Gary Hart’s withdrawal following the Donna Rice affair.

In the 1990 gubernatorial election, Cuomo was re-elected with 53.17% of the vote to Republican Pierre Andrew Rinfret’s 21.35% and Conservative Herbert London’s 20.40%.

When Cuomo was asked if he was planning to run for President in 1992, he would say: “I have no plans and no plans to make plans,” but he refused to rule it out. In October 1991, news broke that he was interested in running and was taking advice from consultant Bob Shrum. At the same time, he began working on a budget with the New York State Legislature, and promised not to make any announcements about a presidential run until he had reached an agreement with the Republican-controlled State Senate and the Democratic-controlled State Assembly. Two polls taken in November of the New Hampshire Democratic primary showed him leading the field by at least twenty points, and a poll in December showed him trailing President George H. W. Bush 48% to 43%, having been behind by 28% two months previously.

The filing deadline for the New Hampshire primary was on December 20, 1991, and Cuomo was expected to wait until the deadline before filing and declaring his candidacy. In the days before the deadline, Cuomo couldn’t come to an agreement with Republicans in the Legislature and on deadline day, he was required to hand in a ballot application in person, so he kept an airplane waiting on the tarmac as he decided whether to fly to New Hampshire to enter the race. Democratic party leaders asked him to run and he prepared two statements, one in case he ran and one in case he didn’t. He tried to come to a final agreement over the budget, but couldn’t, and he made an announcement at 3:30 p.m. that day: 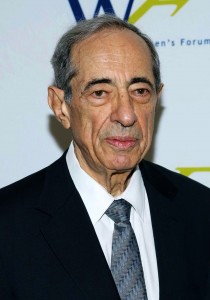 “It is my responsibility as governor to deal with this extraordinarily severe problem. Were it not, I would travel to New Hampshire today and file my name as a candidate in this presidential primary. That was my hope and I prepared for it. But it seemed to me that I cannot turn my attention to New Hampshire while this threat hangs over the head of the New Yorkers I have sworn to put first.”