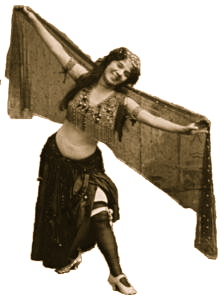 Ashea Wabe is seen here as Little Egypt, in one of a series of photos by Benjamin Falk.

Little Egypt was the stage name for three popular belly dancers. They had so many imitators, the name became synonymous with belly dancers generally.

Fahreda Mazar Spyropoulos, (c. 1871 – April 5, 1937), also performing under the stage name Fatima, appeared at the “Street in Cairo” exhibition on the Midway at the World’s Columbian Exposition, held in Chicago in 1893. In 1898 Mark Twain had a near fatal heart attack watching Farida go through her paces. 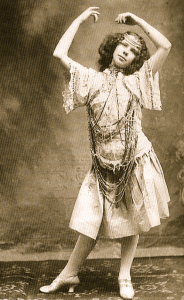