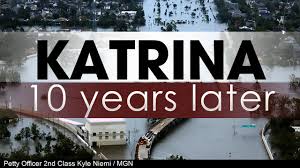 Democracynow.org – President Barack Obama is in New Orleans today to mark the 10th anniversary of Hurricane Katrina. According to prepared remarks, Obama will declare: “What started out as a natural disaster became a man-made one—a failure of government to look out for its own citizens.” In 2005, Democracy Now! was on the ground in the days following the storm that devastated the Gulf Coast, killing more than 1,800 people and forcing more than 1 million people to evacuate. We turn now to excerpts of Democracy Now!’s coverage of Hurricane Katrina. 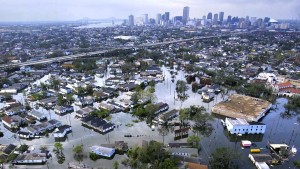 Hurricane Katrina by the Numbers: 10 Years Later by
Anne Most

Katrina remains the most catastrophic and costly hurricane in U.S. history

This week marks the 10th anniversary of the tragic day that Hurricane Katrina violently swept through the southeastern U.S. The historic storm killed almost 2,000 people, left thousands stranded without homes and scarred many lives for years to come.

Katrina initially touched down in southeast Louisiana as a Category 3 storm on Aug. 29, 2005, at 6 a.m. As it worked its way up the southeast, it left the city of New Orleans unrecognizable. Over 100,000 homes were destroyed, and 80% of the city was flooded.

The government issued close to $142 billion in relief funds for the southeast region of the country, providing injured and displaced people, food, shelter and medical care. 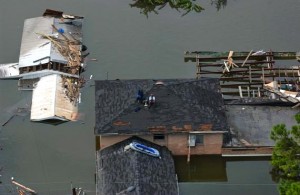 The southeastern U.S. is still recovering 10 years later. The population of New Orleans dropped drastically after Hurricane Katrina, from 483,633 residents before the storm, down to around 200,000 in 2006. Relief organizations like Habitat for Humanity and the American Red Cross have made it possible for the New Orleans population to increase to approximately 378,315 residents.

Watch the video above to see the evolution of New Orleans, 10 years after Hurricane Katrina.