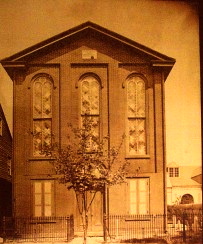 Morgan, Joseph H. Morgan’s History of the New Jersey Conference of the A.M.E. Church, from 1872 to 1887, and of the several churches, as far as possible, from date of organization with biographical sketches of members of the conference.

Morgan’s rich History is divided into several parts. The first contains biographical sketches (along with some line portraits) of early church leaders. Following those are the histories of AME churches throughout the state, including names of the founders, along with previous pastors, trustees, stewards, superintendents of Sunday-school, secretaries, assistants, teachers and librarians where available. Chapter III covers the organization and work of the conferences with summaries of the sessions, motions, addresses, and attendees. Chapter IV gives “expressions of opinion” from the conferences on matters such as education, the emigration ofÂ blacks to Liberia, Chinese immigration, and the state of the country. Other sections include biographies of A.M.E. leaders from outside New Jersey, Sabbath school and missionary work, statistics and obituaries.

The digitization of the following books is supported by the New Jersey State Library and was funded by the Institute of Museum and Library Services, an independent federal agency whose mission is to create strong libraries and museums that connect people to information and ideas.

Use the radio buttons below to select a particular publication to search. Click the titles to go directly to the publication.