You are here: Home / Brazil TV / Events / History of Brazil

The history of Brazil starts with Indigenous Peoples of the Americas, who arrived thousands of years ago by crossing the Bering land bridge into Alaska and then moving south.

The European first to explore Brazil was Pedro Álvares Cabral on April 22, 1500 under the sponsorship of Portugal. From the 16th to the 19th centuries, Brazil was a colony of Portugal. On September 7, 1822, the country declared its independence from Portugal and became a constitutional monarchy, the Empire of Brazil. A military coup in 1889 established a republican government. The country has seen a dictatorship (1930–1934 and 1937–1945) and a period of military rule (1964–1985).

Fossil records found in Minas Gerais show evidence that the area now called Brazil has been inhabited for at least 8,000 years by indigenous people.   The dating of the origins of the first inhabitants, who were called “Indians” (índios) by the Portuguese, are still a matter of dispute among archaeologists. The current most widely accepted view of anthropologists, lingus and geneticists is that they were part of the first wave of migrant hunters who came into the Americas from Asia, either by land, across the Bering Strait, or by coastal sea routes along the Pacific, or both.

The Andes and the mountain ranges of northern South America created a rather sharp cultural boundary between the settled agrarian civilizations of the west coast and the semi-nomadic tribes of the east, who never developed written records or permanent monumental architecture. For this reason, very little is known about the history of Brazil before 1500. Archaeological remains (mainly pottery) indicate a complex pattern of regional cultural developments, internal migrations, and occasional large state-like federations.

At the time of European discovery, the territory of current day Brazil had as many as 2,000 tribes. The indigenous peoples were traditionally mostly semi-nomadic tribes who subsisted on hunting, fishing, gathering, and migrant agriculture. When the Portuguese arrived in 1500, the Natives were living mainly on the coast and along the banks of major rivers. Initially, the Europeans saw the natives as noble savages, and miscegenation of the population began right away. Tribal warfare, cannibalism and the pursuit of Amazonian brazilwood (see List of meanings of countries’ names) for its treasured red dye convinced the Portuguese that they should “civilize” the Natives. But the Portuguese, like the Spanish in their South American possessions, had unknowingly brought diseases with them, against which many Natives were helpless due to lack of immunity. Measles, smallpox, tuberculosis, gonorrhea, and influenza killed tens of thousands. The diseases spread quickly along the indigenous trade routes, and whole tribes were likely annihilated without ever coming in direct contact with Europeans. 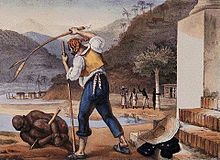 Slavery in Brazil shaped the country’s social structure and ethnic landscape. During thecolonial epoch and for over six decades after the 1822 independence, slavery  was a mainstay of the Brazilian economy, especially in mining, cotton, and sugar cane production.

Brazil obtained an estimated 35% of all enslaved Africans traded in the Atlantic slave trade. More than 3 million Africans were sent to Brazil to work mainly on sugar cane plantations from the 16th to the 19th century. Starting around 1550, the Portuguese began to trade enslaved Africans due to two main reasons:

During the 15th century, after realising the extension and importance of slave trading for the African economy, the Kingdom of Portugal‘s soldiers, explorers and merchants involved themselves in the trade in black enslaved Africans along with other tradable items through the establishment of several coastal trading posts. Starting around 1550, the Portuguese began to trade African slaves to work the sugar plantations they were developing in their newly discovered colony of Brazil, once the European discoverers needed more human resources to use in the new continent, and the numbers of native indigenous peoples had declined. Although Portuguese Prime Minister Marquês de Pombal abolished slavery in mainland Portugal on February 12, 1761, slavery continued in Portugal’s overseas colonies, particularly in Brazil, until its final abolition in 1888.

The enslaved Africans were useful for the sugar plantations in many ways. They were less vulnerable to tropical diseases. Slavery was practiced among all classes. From the late 18th century to the 1830s, including by the time of the Rebellions in Bahia, slaves were owned by the upper and middle classes, by the poor, and even by other slaves.

The benefits of using the enslaved Africans far exceeded the costs to the owners. After 2–3 years, enslaved Africans repaid the cost of buying them, and slave plantation owners began to make profits from them. Brazil’s plantation owners made lucrative profits per year. The very harsh manual labour of the sugar cane fields involved slaves using hoes to dig large trenches. They planted sugar cane in the trenches and then used their bare hands to spread manure.

A national survey conducted in 2000 by the Pastoral Land Commission, a Roman Catholic church group, estimated that there were more than 25,000 forced workers in Brazil. More than 1,000 slave-like laborers were freed from a sugar cane plantation in 2007 by the Brazilian Government.

Black in Latin America is the third of a trilogy that began in 1999 with the broadcast of Professor Gates’s first series for public television, Wonders of the African World, an exploration of the relationship between Africa and the New World, a story he continued in 2004 with America Beyond the Color Line, a report on the lives of modern-day African Americans. Black In Latin America, examines how Africa and Europe came together to create the rich cultures of Latin America and the Caribbean.