An airline is a company that provides air transport services for traveling passengers and freight. Airlines lease or own their aircraft with which to supply these services and may form partnerships or alliances with other airlines for mutual benefit. Generally, airline companies are recognized with an air operating certificate or license issued by a governmental aviation body.

Airlines vary from those with a single aircraft carrying mail or cargo, through full-service international airlines operating hundreds of aircraft. Airline services can be categorized as being intercontinental, intra-continental, domestic, regional, or international, and may be operated as scheduled services or charters.

Failed attempt at an airline before DELAG

American aviation pioneers, such as Rufus Porter and Frederick Marriott, attempted to start airlines using airships in the mid-19th century, focusing on the New York–California route. Those attempts floundered due to such mishaps as the airships catching fire and the aircraft being ripped apart by spectators. DELAG, Deutsche Luftschiffahrts-Aktiengesellschaft was the world’s first airline.   It was founded on November 16, 1909 with government assistance, and operated airships manufactured by The Zeppelin Corporation. Its headquarters were in Frankfurt. The four oldest non-dirigible airlines that still exist are Netherlands’ KLM, Colombia’s Avianca, Australia’s Qantas, and the Czech Republic’s Czech Airlines. KLM first flew in May 1920, while Qantas (which stands forQueensland and Northern Territory Aerial Services Limited) was founded in Queensland, Australia, in late 1920. 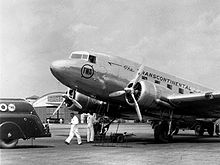 TWA Douglas DC-3 in 1940. The DC-3, often regarded as one of the most influential aircraft in the history of commercial aviation, revolutionized the aviation industry.

Tony Jannus conducted the United States’ first scheduled commercial airline flight on 1 January 1914 for the St. Petersburg-Tampa Airboat Line.   The 23-minute flight traveled between St. Petersburg, Florida and Tampa, Florida, passing some 50 feet (15 m) above Tampa Bay in Jannus’ Benoist XIV biplane flying boat. Chalk’s International Airlines began service between Miami and Bimini in the Bahamas in February 1919. Based in Ft. Lauderdale, Chalk’s claimed to be the oldest continuously operating airline in the United States until its closure in 2008.

Following World War I, the United States found itself swamped with aviators. Many decided to take their war-surplus aircraft on barnstorming campaigns, performing aerobatic maneuvers to woo crowds. In 1918, the United States Postal Service won the financial backing of Congress to begin experimenting with air mail service, initially using Curtiss Jenny aircraft that had been procured by the United States Army Air Service. Private operators were the first to fly the mail but due to numerous accidents the US Army was tasked with mail delivery.  During the course of the Army’s involvement they proved to be too unreliable and lost their air mail duties.   By the mid-1920s, the Postal Service had developed its own air mail network, based on a transcontinental backbone between New York and San Francisco.   To supplant this service, they offered twelve contracts for spur routes to independent bidders. Some of the carriers that won these routes would, through time and mergers, evolve into Pan Am, Delta Air Lines, Braniff Airways, American Airlines, United Airlines (originally a division of Boeing),Trans World Airlines, Northwest Airlines, and Eastern Air Lines.

Service during the early 1920s was sporadic: most airlines at the time were focused on carrying bags of mail. In 1925, however, the Ford Motor Company bought out the Stout Aircraft Company and began construction of the all-metal Ford Trimotor, which became the first successful American airliner. With a 12-passenger capacity, the Trimotor made passenger service potentially profitable. Air service was seen as a supplement to rail service in the American transportation network.

At the same time, Juan Trippe began a crusade to create an air network that would link America to the world, and he achieved this goal through his airline, Pan American World Airways, with a fleet of flying boats that linked Los Angeles to Shanghai and Boston to London. Pan Am and Northwest Airways (which began flights to Canada in the 1920s) were the only U.S. airlines to go international before the 1940s.

With the introduction of the Boeing 247 and Douglas DC-3 in the 1930s, the U.S. airline industry was generally profitable, even during the Great Depression. This trend continued until the beginning of World War II.

In October 1945, the American Export Airlines became the first airline to offer regular commercial flights between North America and Europe.  Shown here is Am Ex Boeing 377 Stratocruiser in 1949.

As governments met to set the standards and scope for an emergent civil air industry toward the end of the war, the U.S. took a position of maximum operating freedom; U.S. airline companies were not as hard-hit as European and the few Asian ones had been. This preference for “open skies” operating regimes continues, with limitations, to this day.

World War II, like World War I, brought new life to the airline industry. Many airlines in the Allied countries were flush from lease contracts to the military, and foresaw a future explosive demand for civil air transport, for both passengers and cargo. They were eager to invest in the newly emerging flagships of air travel such as the Boeing Stratocruiser, Lockheed Constellation, and Douglas DC-6. Most of these new aircraft were based on American bombers such as the B-29, which had spearheaded research into new technologies such as pressurization. Most offered increased efficiency from both added speed and greater payload.

In the 1950s, the De Havilland Comet, Boeing 707, Douglas DC-8, and Sud Aviation Caravelle became the first flagships of the Jet Age in the West, while the Eastern bloc had Tupolev Tu-104 and Tupolev Tu-124 in the fleets of state-owned carriers such as Czechoslovak ČSA, Soviet Aeroflot and East-German Interflug. The Vickers Viscount and Lockheed L-188 Electra inaugurated turboprop transport.

The next big boost for the airlines would come in the 1970s, when the Boeing 747, McDonnell Douglas DC-10, and Lockheed L-1011inaugurated widebody (“jumbo jet”) service, which is still the standard in international travel. The Tupolev Tu-144 and its Western counterpart, Concorde, made supersonic travel a reality. Concorde first flew in 1969 and operated through 2003. In 1972, Airbusbegan producing Europe’s most commercially successful line of airliners to date. The added efficiencies for these aircraft were often not in speed, but in passenger capacity, payload, and range. Airbus also features modern electronic cockpits that were common across their aircraft to enable pilots to fly multiple models with minimal cross-training.

Travel Concepts, Inc., founded by William J. Tobin in 1971, developed the first travel kits to be distributed in First Class and Business Class cabins, and also provided in-flight educational games for children. The travel kits and the educational game programs have been utilized by most major airlines for 25 years.

Pan Am Boeing 747 Clipper Neptune’s Car in 1985. The deregulation of the American airline industry increased the financial troubles of the iconic airline which ultimately filed for bankruptcy in December 1991.

1978’s U.S. airline industry deregulation lowered federally controlled barriers for new airlines just as a downturn in the nations economy occurred. New start-ups entered during the downturn, during which time they found aircraft and funding, contracted hangar and maintenance services, trained new employees, and recruited laid off staff from other airlines.

Major airlines dominated their routes through aggressive pricing and additional capacity offerings, often swamping new start-ups. In the place of high barriers to entry imposed by regulation, the major airlines implemented an equally high barrier called loss leaderpricing. In this strategy an already established and dominate airline stomps out its competition by lowering airfares on specific routes, below the cost of operating on it, choking out any chance a start-up airline may have. The industry side effect is an overall drop in revenue and service quality. The financial shortfalls have all been imposed upon airline employees. Since deregulation in 1978 the average domestic ticket price has dropped by 40%. So has airline employee pay. By incurring massive losses the airlines of the USA now rely upon a scourge of cyclical Chapter 11 bankruptcy proceedings to continue doing business. America West Airlines (which has since merged with US Airways) remained a significant survivor from this new entrant era, as dozens, even hundreds, have gone under.

In many ways, the biggest winner in the deregulated environment was the air passenger. Although not exclusively attributable to deregulation, indeed the U.S. witnessed an explosive growth in demand for air travel. Many millions who had never or rarely flown before became regular fliers, even joining frequent flyer loyalty programs and receiving free flights and other benefits from their flying. New services and higher frequencies meant that business fliers could fly to another city, do business, and return the same day, for almost any point in the country. Air travel’s advantages put intercity bus lines under pressure, and most have withered away.

By the 1980s, almost half of the total flying in the world took place in the U.S., and today the domestic industry operates over 10,000 daily departures nationwide.

Toward the end of the century, a new style of low cost airline emerged, offering a no-frills product at a lower price. Southwest Airlines, JetBlue, AirTran Airways, Skybus Airlines and other low-cost carriers began to represent a serious challenge to the so-called “legacy airlines”, as did their low-cost counterparts in many other countries. Their commercial viability represented a serious competitive threat to the legacy carriers. However, of these, ATA and Skybus have since ceased operations.

Increasingly since 1978, US airlines have been reincorporated and spun off by newly created and interally led manangement companies, and thus becoming nothing more than operating units and subsidiaries with limited financially decisive control. Among some of these holding companies and parent companies that are the relatively well known, are the UAL Corporation, along with the AMR Corporation, among a long list of airline holding companies sometime recognized world wide. Less recognized are the private equity firms which often seize managerial, financial, and board of directors control of distressed airline companies by temporarily investing large sums of capital in air carriers, so as to rescheme an airlines assets into a profitable organization or liquidating an air carrier of their profitable and worthwhile routes and business operations.

Thus the last 50 years of the airline industry have varied from reasonably profitable, to devastatingly depressed. As the first major market to deregulate the industry in 1978, U.S. airlines have experienced more turbulence than almost any other country or region. In fact, no U.S. legacy carrier survived bankruptcy-free. Amongst the outspoken critics of deregulation, former CEO of American Airlines, Robert Crandall has publicly stated.