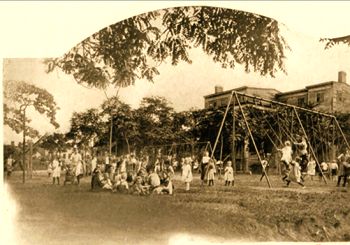 Riverbank Park is located off Raymond Boulevard, Market, Van Buren, and Somme Streets, within the east side section of Newark. A portion of the park across Raymond Boulevard has 1000 feet of waterfront access on the Passaic River, and includes land which once held the old Morris Canal.

At 10.77 acres, it is the smallest Essex County Park. The demands on it are great nevertheless, and it is intensely developed for recreation with very little unused natural area.

The acreage for this park was acquired in 1907 and the plans were designed by the Olmsted Brothers firm. The concrete footpaths are dotted with large trees, and plantings of small shrubbery on the slopes have successfully helped in the prevention of erosion.

Raymond Boulevard, a major road, separates the heavily used main body of the park from the open waterfront section. There the land is left undisturbed, and provides a rare stretch of open waterfront amid a largely industrial area.

In earlier years the famous “Newark Bears,” a semi-professional baseball team, used the baseball diamond in this park.

In recent years the park became a subject of controversy due to a proposal to redevelop the park as a baseball stadium a plan opposed by the community and subsequently abandoned and the simultaneous discovery of contamination in the soil, causing the park to be closed for environmental cleanup. The positive results of these events are that the park is now listed on both the New Jersey and the National Registers of Historic Places, and a multi-million dollar restoration and upgrade of the park was completed in 2003.

Picture above: A TEMPORARY PLAYGROUND, 1907