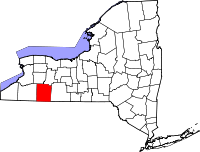 On the southern line of New York State, two hundred miles from Albany, lies Allegany County, with its hills, farms and prosperous towns. It was organized from a part of Genesee County, April 7, 1806, and has an area of 1,033 square miles. Because of its broken surface, high summits and abruptly descending valleys, it was rather late in being settled and developed. The Genesee River, which flows toward the northeast through the county, while of value in draining the region, led in the wrong direction to enable the pioneer to arrive at its source. The land to the north is less rugged and more fertile, and it was here that the first comers located, but settlement of the county did not begin until the early years of the nineteenth century.

The two western tiers of towns in the county were a part of the Holland Land purchase, while the remaining sections were a part of the Morris Reserve. John B. Church became the owner of 1,000,000 acres of this Morris tract, and his son, on becoming the possessor of half of his father’s land, made it his home and was the pioneer of the Angelica district, 1804.

The forests were probably the main attraction in the early days, for the hills, which rise to a height of 2,500 feet, were covered with pine and, in sections, with hardwoods of great size. The Genesee and its many tributaries gave easy outlet for the cut timber, and the streams on the south side flowed into the Susquehanna. The forests have never been completely wiped out, and form a source of income today. As the timber was removed from the lower levels, and the land laid bare, agriculture crept in, and it is this industry that is paramount in the county now. Grain was at first the principal crop, this to be displaced by wool growing and cattle rising as canal and railroad opened the way to other grain lands. But these in turn have been displaced by dairying, mixed farming and, to quite an extent, fruit culture. Apples and grapes do well, while the humble potato is one of the main productions next to milk and hay.

The inaccessibility of the early days passed away with the building of the Genesee Valley Canal, which extended from the north boundary of the county through to the west side. The Erie and other railroads tapped other parts of allegany. Not only were farm products and lumber given an opportunity to reach markets, but the growth of towns hastened, and the location within the county of many manufacturing industries encouraged.

The discovery of a great oil pool beneath the surface of the county was perhaps the most momentous occasion in its history. Strangely the first petroleum in the United States was noted by Roche-d’Allion, a French Jesuit, July 18, 1627, near Cuba in this county. Until the coming in of the famous Triangle well in June, 1879, nothing had come of the priest’s find. Although the oil boom has long since passed, a fabulous amount of money came into the county, and there were towns growing overnight. For fifteen years the oil brought to the surface had more value than all the rest of the county’s products combined. It could not last, at least on the scale at which it had started, and the oil production of Allegany occupies a very back seat in the home of its prosperity.

Upon the erection of the county, Angelica was made the shiretown. A brick courthouse was erected in 1819 a wooden jail constructed, but these were not kept in repair and soon depreciated. A movement started in 1857 for the removal of the courthouse to a location on the railroad, and a law passed to this effect the next year, but the execution of this law was delayed by legal proceedings. Buildings were rushed to completion in the new county seat, Belmont, with the expectation that it would be the sole shiretown. And such it was for two years, but in 1860 the Legislature passed an act whereby the county was divided into two jury districts and the courts were ordered held alternately in Angelica and Belmont. This condition ruled until 1892, when the latter place gained full possession of the field, and the courthouse in Angelica was sold for $855.