You are here: Home / Collection / New York / Borough of Queens 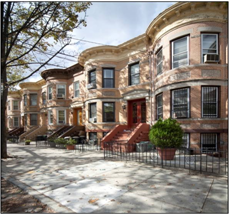 The proposed Central Ridgewood Historic District is significant as an intact grouping of approximately 940 buildings, most of which are brick rowhouses, representing one of the most harmonious, and architecturally-distinguished enclaves of working-class dwellings built in New York City during the early twentieth century. Most of the houses were constructed between 1900 and the mid-1920s, when Ridgewood was being developed by German-Americans and immigrants from Germany. Many of the block fronts, which feature projecting bays, uninterrupted cornice lines, and bricks produced by the Kreischer Brick Manufacturing Company of Staten Island, were designed by the architectural firm Louis Berger & Company and built by developers August Bauer and Paul Stier. The district retains a high level of integrity and the ambience that has distinguished it since the early twentieth century.

Transportation improvements and the consolidation of Greater New York City contributed to the development of Ridgewood, which was characterized by open farmland and several amusement parks in the 19th century. Denser building activity had begun with the coming of the electric trolley in 1894, and after 1898, Ridgewood was subjected to the eastward expansion of a growing New York City. Located adjacent to Brooklyns Eastern District (which contained the communities of Bushwick, Williamsburg and Greenpoint), Ridgewood became an ideal location for upwardly mobile German-Americans to relocate, away from the over-crowding and more recent immigrants inhabiting Bushwick and Williamsburg, as well as Lower East Side. Corresponding with the construction of the buildings in the proposed historic district, urbanization was triggered by the opening of the elevated train around the turn of the century. Providing rapid and dependable rail service, the El was extended from its original terminus at Myrtle and Wyckoff Avenues to Fresh Pond Road and 67th Avenue in 1915.

Louis Berger & Co. was the architect of record for over 5,000 buildings in Ridgewood and Bushwick between 1895 and 1930. Born in 1875 in Rheinpfalz, Germany, Louis Berger immigrated to America as a young boy in 1880 and settled in Ridgewood in 1892. He studied architecture at Pratt Institute in Brooklyn and served as an apprentice with the firm Carrere & Hastings before establishing his own business in Bushwick in 1895. His specialty was in the design of tenement houses and in the laws governing their construction. In 1910, he moved his office to Ridgewood, Queens, when he joined the development team of August Bauer and Paul Stier as resident architect. Berger, the most prolific architect to work in Ridgewood, benefitted greatly from his association with Bauer & Stier, Inc., which alone built over 2,000 houses in Ridgewood.

Most of the houses in the district were built after 1905 when fire codes in Ridgewood began requiring masonry construction for attached rows. The buildings have load-bearing masonry walls constructed of red-, buff-, amber- and brown-colored Kreischer brick used in various combination from houses to house or row to row. The buildings have fine detailing in the Renaissance Revival Style, including cast-stone lintels, door surrounds, pediments, and string courses, as well as pressed metal cornices decorated with brackets, dentils, and swags. Almost all of the original brownstone stoops remain intact, as do many of the original cut-glass and wood doors and iron railings, fences and gates.

Most of the corner buildings were built with commercial storefronts at the first floors, many of which have been altered. Representing a cohesive collection of speculative urban architecture, the row houses in the proposed Central Ridgewood Historic District retain extremely high levels of architectural integrity and represent an important part of the development of housing in New York City.

The buildings in the proposed extension retain the form, massing and character defining features of the styles in which they were designed, including vernacular Greek Revival, Italianate, Colonial and Dutch Colonial Revival, Tudor Revival, Mediterranean Revival, and Arts and Crafts, giving the area a distinct sense of place. The land that comprises the proposed district extension was part of the 1853 Marathon subdivision, one of the earliest of its type in northeastern Queens. Created by local farmer, Jeremiah Lambertson, who had purchased the property 10 years earlier, the land was laid out in an urban grid of large, almost-one-acre lots, which were sold at auction.  Three buildings in the proposed district, 38-60, 38-80 and 39-18 Douglaston Parkway, date from the development of this subdivision during the 1850s and 1860s.

These vernacular farmhouses, which feature Greek Revival- and Italianate-style details, mark the areas transition from its rural origins to smaller farms and suburban estates. The house at 38-80 Douglaston Parkway has a Queen Anne-style addition that appears to have been built in the late nineteenth century.  In 1866-67, the Flushing and Northside Railroad reached the Little Neck area and the local station and village were renamed Douglaston for William Douglas, who donated a building on his estate as the station house. The facilitated commute to Manhattan (although it still involved ferry service from Long Island City) encouraged the key period of the areas development, the suburban growth that took place in Douglaston from 1890 to 1930. Several buildings in the proposed district, built in the 1890s or first decade of the 20th century in the Colonial Revival or Art and Crafts styles, retain the form and character defining features of these styles.

Notably, the stucco house at 18 Cherry Street (1900-01) with its rubble stone foundation, multi-light wood casement windows and exposed roofed beams and rafters, is an excellent example of a high-style, Arts and Crafts residence.  Suburban development increased once the railroad tunnel under the East River was completed in 1909, as the direct train link to Manhattan stimulated the construction of most of the buildings in the proposed Douglaston Historic District extension from 1910 until 1930.  Although some of the lots were further subdivided during this period, the setbacks and layouts of the new buildings maintained the areas park-like setting. The nine houses in the proposed extension built during this period were designed in the Arts and Crafts, Mediterranean Revival, and Colonial Revival styles, including two mirror-image, gambrel roofed, Dutch Colonial Revival houses at 39-15 and 39-27 Douglaston Parkway.  Necessitated by the increased population of Douglaston in the early 20th century, the Community Church was formed about 1915.

A temporary church (now demolished) was built in 1919, at which time the two-story, Arts & Crafts style residence, which still exists behind the present church, appears to have been built. The permanent brick church building, designed by William Neil Smith, was constructed in 1923-24 in the Colonial Revival style with a two-story pedimented entry porch supported by Tuscan/Doric columns and a pedimented entry with Doric pilasters and an elliptical fanlight among its prominent features. The adjacent annex, designed to be harmonious with the church, was constructed in c. 1953. To serve the educational needs of the growing community, the New York City Department of Education constructed Public School 98 in 1930-31. Still in use as an elementary school and currently known as the Douglaston School, this Colonial Revival style brick building features a hexagon-shaped, domed cupola, a prominent central entry marked by a semi-circular pediment, a large, multi-light arched window, and cast-stoneÂ cornice brackets, quoins, keystones, door surround, and a sway and shield ornamentÂ crowning the main entry.

Constructed at the tail end of the areas major suburban development period in 1928-30, the apartment building at 38-30 West Drive (Alexander Vierling, architect) was built in the Tudor Revival style. Although the building type is unique in a district of singlefamily homes, the style and details of the building, including its brick veneer, half-timbering, crenellated roofline, slate-covered dormers, and steel casement windows, are found on buildings throughout the designated Douglaston and Douglaston Hill Historic Districts.  The proposed extension to the Douglaston Hill Historic District is significant for its principles of mid-19th century and early-20th century community planning and development and well as the buildings high level of architectural quality. The included buildings recall the transformation of the community from large farms and estates to smaller farms and later to the suburban-style community that it is today. Most of the buildings retain the forms and characteristics of popular architectural styles from the 1890s to the 1920s. Distinguished by these styles and large lots, the area retains a visual coherence and suburban sense of place that has become increasingly rare within the boundaries of New York City.