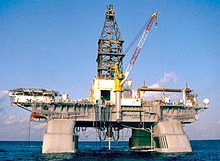 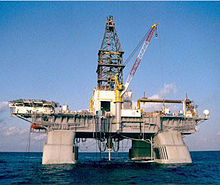 Deepwater Horizon prior to explosion. Parts of the rig providing buoyancy are not visible below the waterline in this picture.

The Deepwater Horizon was a 9-year-old semi-submersible mobile offshore drilling unit, a massive floating, dynamically positioned drilling rig that could operate in waters up to 8,000 feet (2,400 m) deep and drill down to 30,000 feet (9,100 m).  The rig was built by South Korean company Hyundai Heavy Industries.   It was owned by Transocean, operated under the Marshallese flag of convenience, and was under lease to BP from March 2008 to September 2013.   At the time of the explosion, it was drilling an exploratory well at a water depth of approximately 5,000 feet (1,500 m) in the Macondo Prospect, located in the Mississippi Canyon Block 252 of the Gulf of Mexico in the United States exclusive economic zone about 41 miles (66 km) off the Louisiana coast.  BP was the operator and principal developer of the Macondo Prospect with a 65% share, while 25% is owned by Anadarko Petroleum Corporation, and 10% byMOEX Offshore 2007, a unit of Mitsui. 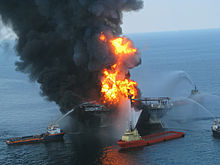 At approximately 9:45 p.m. CDT, on April 20, 2010, high pressure methane gas from the well expanded into the drilling riser and was released onto the drilling rig, where it ignited and exploded, engulfing the drilling rig.   Most of the workers escaped the rig by lifeboat and were subsequently evacuated by boat or airlifted by helicopter for medical treatment; however, eleven workers were never found despite a three-day Coast Guard search operation, and are believed to have died in the explosion.   Efforts by multiple ships to douse the flames were unsuccessful. After burning for approximately 36 hours, the Deepwater Horizon sank on the morning of April 22, 2010.

Volume and extent of oil spill

An oil leak was discovered on the afternoon of April 22 when a large oil slick began to spread at the former rig site.   According to the Flow Rate Technical Group, the leak amounted to about 4.9 million barrels (780,000 m3) of oil, exceeding the 1989 Exxon Valdez oil spill as the largest ever to originate in U.S.-controlled waters and the 1979 Ixtoc I oil spill as the largest spill in the Gulf of Mexico.