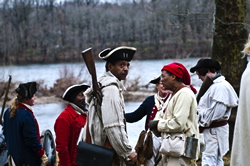 The Crossing Part 1-2 George Washington and the Continental Army of America crossing the Delaware River on Christmas Day, and the Battle of Trenton on December 26th, 1776, during the Revolutionary War.