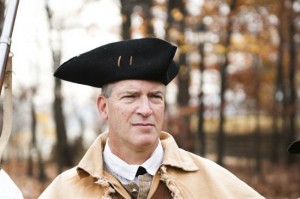 Battle of Fort Lee and Retreat Across the Jerseys

Forced by a surprise British attack to abandon Fort Lee in November 1776, Washington’s army undertook a measured withdrawal across New Jersey followed by Cornwallis’ British army. His retreat across the Jerseys followed the primary roads of the day through New Bridge, Hackensack, Newark, Elizabeth, Woodbridge, New Brunswick, Princeton, and Trenton. Conditions for the Continental Army looked bleak. On the retreat Thomas Paine wrote these stirring words, “these are the times that try men’s souls.”

A watchful American soldier looks across to Fort Washington on the New York side of the Hudson River wondering what fate awaits him and his fellow defenders positioned at Fort Lee on the Jersey side. The answer came just four days later. General Cornwallis leading 4000 British troops, scaled New Jersey’s steep Palisades in the dark of night six miles north of Fort Lee on November 19 and struck the sleeping garrison in a surprise attack.

On Christmas Night 1776, Washington’s army crossed the Delaware River in a blizzard and made a bold strike, defeating the Hessian garrison in Trenton, forever altering the course of the war. The First Battle of Trenton was followed a week later by a second battle from which the Continental Army made a quiet nighttime withdrawal in order to initiate a surprise attack on British forces in Princeton. Known as the ‘Ten Crucial Days,’ these events galvanized the tattered army and rekindled hope for the American cause.

Though many boats were used to cross the American forces to the New Jersey side of the Delaware River on Christmas Night, the Durham boat has become the iconic symbol of this historic event and the determination and courage of General Washington and his men during the bleak wintry days of 1776. Washington had ordered every boat along the Delaware River from Trenton to 70 miles north be commandeered and guarded, making the boats unattainable by the British and a vital resource for the American troops. Captain Daniel Bray, Jacob Gearhart and many other Hunterdon County patriots delivered the boats to McConkey’s Ferry for the crossing on Christmas night.

War is difficult for everyone to deal with; perhaps especially so for those left behind in an era of slow, uncertain communication. New Jersey at the time of the Revolution had no newspaper and only a rudimentary postal service. Sandwiched as New Jersey was between British occupied New York and the Continental Congress based in Philadelphia, life for the residents was continuously disrupted by armies marching and foraging, battling and skirmishing repeatedly across the state.