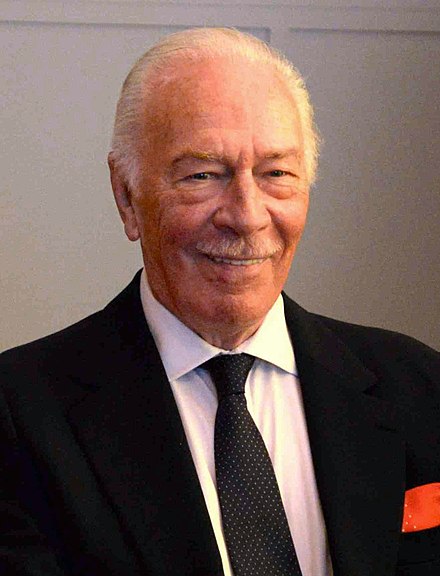 Arthur Christopher Orme Plummer CC (December 13, 1929 – February 5, 2021) was a Canadian actor. His career spanned seven decades, gaining recognition for his performances in film, television, and theatre. Plummer made his Broadway debut in 1954, and continued to act in leading roles on stage playing Cyrano de Bergerac in Cyrano (1974), Iago in Othello, as well as playing the titular roles in Hamlet at Elsinore (1964), Macbeth, King Lear, and Barrymore. Plummer also performed in stage productions J.B., No Man’s Land, and Inherit the Wind.

Plummer was born in Toronto and grew up in Senneville, Quebec. After appearing on stage, he made his film debut in Sidney Lumet‘s Stage Struck(1958), and won great acclaim for his performance as Captain Georg von Trapp in the musical film The Sound of Music (1965) alongside Julie Andrews.[1] Plummer portrayed numerous major historical figures, including Commodus in The Fall of the Roman Empire (1964), Arthur Wellesley, 1st Duke of Wellington in Waterloo (1970), Rudyard Kipling in The Man Who Would Be King (1975), Mike Wallace in The Insider (1999), Leo Tolstoy in The Last Station (2009), Kaiser Wilhelm II in The Exception (2016), and J. Paul Getty in All the Money in the World (2017). Plummer also appeared in Spike Lee‘s Malcolm X (1992), Ron Howard‘s A Beautiful Mind (2001), Terrence Malick‘s The New World (2005), David Fincher‘s The Girl with the Dragon Tattoo (2011), Rian Johnson‘s Knives Out (2019), and Todd Robinson‘s The Last Full Measure (2019). To read more go to the link below: