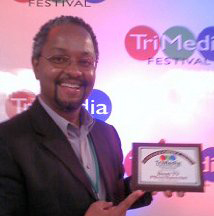 Past: Vice President at CoLours TV Network, Global Manager of Trade and Regulatory Affairs at APL Limited and Manager at Matson Navigation.

Art Thomas’s Summary: In addition to his previous role of EVP with CoLours TV, Art operates Main Man Films, LLC. Originally from Detroit, Michigan, Art attended Notre Dame de Namur University in California where he graduated with a MBA in International Sales / Marketing. Prior to forming his own production company, he logged over 20 years with two Fortune 500 firms, traveling to over 35 countries. Given this global experience, he brings a unique perspective to the film and television industry.

Specialties: Produced projects in Japan, Belize and the United Kingdom and was featured in the 2004 August/September issue of Black Film Makers Magazine (UK) and the front page of the Denver Business Journal (US). In 2005 he received a ‘Telly Award’ for his production support of ‘Tiffany At Breakfast’, and in 2008, he was awarded the prestigious ‘Audience Choice Award’ for ‘Bed of Dreams’. His latest endeavors included coverage of the 56th President Inauguration (2009) of Barack Obama in Washington, DC

Mini Biography: In addition to his work at Main Man Films, he held the position of Executive Vice President of Programming with CoLours TV a national multicultural. Art holds a Masters in International Marketing from Notre Dame de Namur University and has over 22 years of international business experience, traveling to over 40 countries. He brings a unique perspective to the television/film industry; producing projects in Japan, Belize, England and was featured in the 2004 August issue of BFM, (a UK film magazine) along with other publications. In 2005 he received a ‘Telly Award‘ for his production support of ‘Tiffany At Breakfast’, a 16mm film short, starring Bill Cobbs. In 2007, he was selected as one of only 20 producers to participate in NATPE’s Diversity Fellowship program. In 2008, he produced a music video for recording artist, Reginald K.Son, and accepted the ‘Audience Choice Award‘ for ‘Bed of Dreams’ a TV pilot, starring Colin Cheadle. During 2009 and 2010 he focused primarily on television projects, producing three series in addition to being an advocate for Colorado’s creative industries. He has since returned his attention to film and has several projects in development.