You are here: Home / Education / United States of America / Arizona

Road to Statehood – (Pre 1912) From 13,000 B.C. to 1912 Statehood (and a bit beyond,) this 72 minute, two part program tells the story from pre-historic man to the Spanish Period to the Old West to the beginnings of the New West. It features historians Marshall Trimble, Don Dedera, Lester Budge Ruffner, Barry Goldwater and Morris Udall, as well as the music of Dolan Ellis. 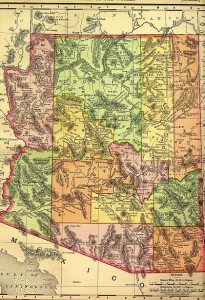 The history of Arizona as recorded by Europeans began in 1539 with the first documented exploration of the area by Marcos de Niza, early work expanded the following year when Francisco Vásquez de Coronado entered the area as well. Arizona was part of Mexico from 1822, but the settled population was small. In 1848, the United States took possession of most of it after the Mexican-American War. The Gadsden Purchase secured the Tucson area in 1853. In 1863, Arizona was split off from the Territory of New Mexico into its own entity. The remoteness was eased by the arrival of railroads in 1880. Arizona became a state in 1912, but was primarily rural with an economy based on cattle, cotton, citrus and copper. Dramatic growth came after 1945, as retirees especially appreciated the warm weather and low costs. Major issues in recent years include ethnic hostility between Anglos and Hispanics, and the bust that followed the real estate bubble of the 2000’s.

In 1836, Texas declared independence from Mexico and claimed much of the territory in the northern lands of Mexico. When the United States annexed Texas in 1846 over the strong objections of the Mexican government, U.S. troops seized the disputed territory. The U.S. won the Mexican-American War (1846–1848) and in the Treaty of Guadalupe Hidalgo (1848), Mexico ceded to the U.S., together with many more territories, approximately the northern 70% of Arizona. 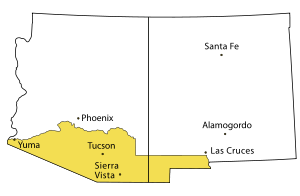 The Gadsden Purchase (shown with present-day state boundaries and cities). 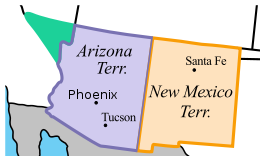 Starting in 1853, the entirety of present-day Arizona was part of the New Mexico Territory. In 1849, the California Gold Rush led as many as 50,000 miners to travel across the region, leading to a booms in Arizona’s population. In 1850, Arizona and New Mexico formed the New Mexico Territory. In 1853, President Franklin Pierce sent James Gadsden to Mexico City to negotiate with Santa Anna, and the United States bought the remaining southern strip area of Arizona and New Mexico in the Gadsden Purchase.

During the Civil War, on March 16, 1861, citizens in southern New Mexico Territory around Mesilla (now in New Mexico) and Tucson invited take-over by the Confederacy. They especially wanted restoration of mail service. These secessionists hoped that a Confederate Territory of Arizona (CSA) would take control, but in March 1862, Union troops from California captured the Confederate Territory of Arizona and returned it to the New Mexico Territory.

The Battle of Picacho Pass, April 15, 1862, was a battle of the Civil War fought in the CSA and one of many battles to occur in Arizona during the war. Between three sides, Apaches, Confederates and Union forces. In 1863, the U.S. split up New Mexico along a north-south line to create the Arizona Territory. Prescott was a small village when it was replaced Tucson as the territorial capital in 1877. 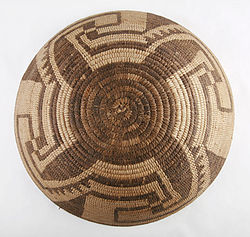 This ornate grain basket by Akimel O’odham dates from the early 20th century, showing the Native American dimension to the state’s culture.

In the late 19th century the Army built a series of forts to guarantee the Indians would stay on their reservations. The first was Fort Defiance, set up 1851 to awe the Navajos. Small skirmishes were common. In April 1860 one thousand Navajo warriors under Manuelito attacked the fort and were beaten off. The fort was temporarily abandoned during the Civil War but was reoccupied in 1864 by Colonel Kit Carson and the 1st New Mexico Infantry. Carson’s force trapped the Navajos and forced them on the Long Walk to the reservation. They promised to no longer raid their neighbors, and instead focused on sheep ranching; the more sheep a man owned the higher his social status.   Fort Defiance was the agency for the new Navajo reservation until 1936; today it provide medical services to the region.

Fort Apache was built on the Fort Apache Indian Reservation by soldiers from the 1st Cavalry and 21st Infantry in 1870. Only one small battle took place, in September 1881, with three soldiers wounded. When the reservation Indians were granted U.S. citizenship in 1924, the fort was permanently closed down.   Fort Huachuca, east of Tucson, was founded in 1877 as the base for operations against Apaches and raiders from Mexico. From 1913-33 the fort was the base for the “Buffalo Soldiers” (black soldiers) of the 10th Cavalry Regiment. During World War II, the fort expanded to 25,000 soldiers, mostly in segregated all-black units. Today the fort remains in operation and houses the U.S. Army Intelligence Center and the U.S. Army Network.