You are here: Home / Education / United States of America / Alaska 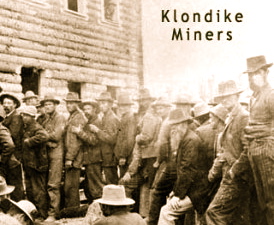 A Little History Of Alaska 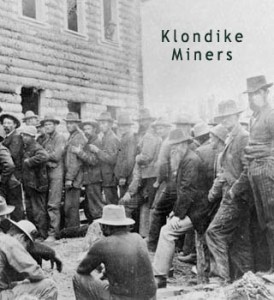 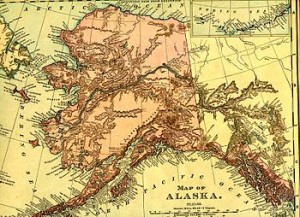 Alaska in 1895 (Rand McNally). The boundary of southeastern Alaska shown is that claimed by the United States prior to the conclusion of the Alaska boundary dispute.

The history of Alaska dates back to the Upper Paleolithic period (around 14,000 BC), when Asiatic groups crossed the Bering land bridge into what is now western Alaska. At the time of European contact by the Russian explorers, the area was populated by Alaska Native groups. The name “Alaska” derives from the Aleut wordAlaxsxaq, (an archaic spelling being Alyeska), meaning “mainland” (literally, “the object toward which the action of the sea is directed”).

In the 1890s, gold rushes in Alaska and the nearby Yukon Territorybrought thousands of miners and settlers to Alaska. Alaska was granted territorial status in 1912. In 1942, two of the outer Aleutian Islands—Attu and Kiska—were occupied by the Japanese and their recovery for the U.S. became a matter of national pride. The construction of military basescontributed to the population growth of some Alaskan cities.

Alaska was granted statehood on January 3, 1959.  In 1964, the massive “Good Friday Earthquake” killed 131 people and leveled several villages.  The 1968 discovery of oil at Prudhoe Bay and the 1977 completion of the Trans-Alaska Pipeline led to an oil boom. In 1989, the Exxon Valdez hit a reef in Prince William Sound, spilling between 11 and 35 million US gallons (42,000 and 130,000 m³) of crude oil over 1,100 miles (1,600 km) of coastline. Today, the battle between philosophies of development and conservation is seen in the contentious debate over oil drilling in the Arctic National Wildlife Refuge. 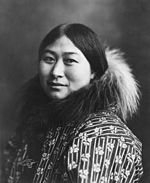 Paleolithic families moved into northwestern North America sometime between 16,000 and 10,000 BC across the Bering land bridge in western Alaska.  Alaska became populated by the Inuit and a variety of European groups. Today, early Alaskans are divided into several main groups: the Southeastern Coastal Indians (the Tlingit, Haida, and Tsimshian), the Athabascans, the Aleut, and the two groups of Eskimos, the Inupiat and the Yup’ik.

The coastal migrants from Asia were probably the first wave of humans to cross the Bering Land Bridge in western Alaska, and many of them initially settled in the interior of what is now Canada. The Tlingit were the most numerous of this group, claiming most of the coastal Panhandle by the time of European contact and are the northernmost of the group of advanced cultures of the Pacific Northwest Coast renowned for its complex art and political systems and the ceremonial and legal system known as the potlatch. The southern portion of Prince of Wales Island was settled by the Haidas fleeing persecution by other Haidas from the Queen Charlotte Islands (now part of British Columbia). The Aleuts settled the islands of the Aleutian chain approximately 10,000 years ago.

Cultural and subsistence practices varied widely among native groups, who were spread across vast geographical distances.

On some islands and parts of the Alaskan peninsula, groups of traders had been capable of relatively peaceful coexistence with the local inhabitants. Other groups could not manage the tensions and perpetrated exactions.  Hostages were taken, individuals were enslaved, families were split up, and other individuals were forced to leave their villages and settle elsewhere. In addition, eighty percent of the Aleut population was destroyed by Old World diseases, against which they had no immunity, during the first two generations of Russian contact.

In 1784, Grigory Ivanovich Shelikhov arrived in Three Saints Bay on Kodiak Island.   Shelikov established killing hundreds of indigenous Koniag, then founded the first permanent Russian settlement in Alaska on the island’s Three Saints Bay. By 1788 a number of Russian settlements had been established by Shelikhov and others over a large region, including the mainland areas around Cook Inlet.

The Russians had gained control of the habitats of the most valuable sea otters, the Kurilian-Kamchatkan and Aleutian sea otters. Their fur was thicker, glossier, and blacker than those of sea otters on the Pacific Northwest Coast and California. The Russians, therefore, advanced to the Northwest Coast only after the superior varieties of sea otters were depleted, around 1788. The Russian entry to the Northwest Coast was slow, however, due to a shortage of ships and sailors. Yakutat Bay was reached in 1794 and the settlement of Slavorossiya was built there in 1795. Reconnaissance of the coast as far as the Queen Charlotte Islandswas carried out by James Shields, a British employee of the Golikov-Shelikhov Company. In 1795 Alexandr Baranov, who had been hired in 1790 to manage Shelikhov’s fur enterprise, sailed into Sitka Sound, claiming it for Russia. Hunting parties arrived in the following years and by 1800 three-quarters of Russian America’s sea otter skins were coming from the Sitka Sound area. In July 1799 Baranov returned on the brig Oryol and established the settlement of Arkhangelsk. It was destroyed by Tlingits in 1802 but rebuilt nearby in 1804 and given the name Novo-Arkhangelsk (New Archangel). It soon become the primary settlement and colonial capital of Russian America. After the Alaska Purchase, it was renamed Sitka, the first capital of Alaska Territory. 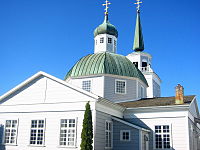 The Russian Orthodox religion (with its rituals and sacred texts, translated into Aleut at a very early stage) had been informally introduced, in the 1740s-1780s, by the fur traders. During his settlement of Three Saints Bay in 1784, Shelikov introduced the first resident missionaries and clergymen. This missionary activity would continue into the 19th century, ultimately becoming the most visible trace of the Russian colonial period in contemporary Alaska. 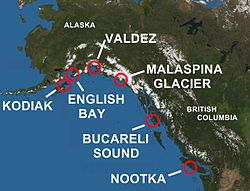 Spanish claims to Alaska dated to the papal bull of 1493, which allocated to the Spanish the right to colonize the west coast of North America. When rival countries, including Britain and Russia, began to show interest in Alaska in the late 18th century, King Charles III of Spain sent a number of expeditions to re-assert Spanish claims to the northern Pacific Coast of North America, including Alaska.

In 1775, Bruno de Hezeta led an expedition designed to solidify Spanish claims to the northern Pacific. One of the expedition’s two ships, the Sonora, under Bodega y Quadra, ultimately reached latitude 58° north, entered Sitka Sound and formally claimed the region for Spain.

The 1779 expedition of Ignacio de Arteaga and Bodega y Quadra reached Port Etches on Hinchinbrook Island, and entered Prince William Sound. They reached a latitude of 61° north, the most northern point obtained by Spain. They also explored Cook Inlet and the Kenai Peninsula, where a possession ceremony was performed, in what today is called Port Chatham.

In 1788, two Spanish ships under Esteban José Martínez and Gonzalo López de Haro sailed north to investigate Russian activity. Haro arrived at Kodiak Island in June and made contact with the Russians at Three Saints Bay. Having obtained information and maps from the posts commander Evstrat Delarov, Haro rejoined Martínez at Sitkinak Island, then sailed to Unalaska Island and the large Russian settlement of Unalaska, commanded by Potap Kuzmich Zaikov. The visit to Unalaska marks the westernmost point reached during the Spanish voyages of exploration in Alaska.

In 1790, Spanish explorer Salvador Fidalgo led an expedition that included visits to the sites of today’s Cordova and Valdez, Alaska, where acts of sovereignty were performed. Fidalgo sailed to Kodiak Island, investigating but not making contact with the small Russian settlement there. Fidalgo then investigated the Russian settlement at Alexandrovsk (today’s English Bay or Nanwalek, Alaska), southwest of today’s Anchorage on the Kenai Peninsula, where again, a formal ceremony of sovereignty was performed.

In 1791, Alessandro Malaspina visited Alaska during his four year scientific exploration of the Pacific Ocean. The main reason for his trip to Alaska was to investigate an inlet claimed by some to be the mythical Northwest Passage. His ships spent about a month at the inlet, now known as Yakutat Bay, where they made contact with the Tlingit.

In the end Spain withdrew from the North Pacific and transferred its claims in the region to the United States in the Adams-Onís Treaty of 1819. Today, Spain’s Alaskan legacy endures as little more than a few place names, among these the Malaspina Glacier and the town of Valdez.

British settlements at the time in Alaska consisted of a few scattered trading outposts, with most settlers arriving by sea. Captain James Cook, midway through his third and final voyage of exploration in 1778, sailed along the west coast of North America aboard the HMS Resolution, from then-Spanish California all the way to the Bering Strait. During the trip, he discovered what came to be known as Cook Inlet (named in honor of Cook in 1794 by George Vancouver, who had served under his command) in Alaska. The Bering Strait proved to be impassable, although the Resolution and its companion ship HMS Discovery made several attempts to sail through it. The ships left the straits to return to Hawaii in 1779.

Cook’s expedition spurred the British to increase their sailings along the northwest coast, following in the wake of the Spanish. Alaska-based posts owned by the Hudson’s Bay Company, operated at Fort Yukon, on the Yukon River, Fort Durham (aka Fort Taku) at the mouth of the Taku River, and Fort Stikine, near the mouth of the Stikine River (associated with Wrangell throughout the early 19th century. 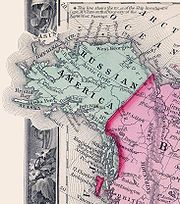 In 1799, Shelikhov’s son-in-law, Nikolay Petrovich Rezanov, acquired a monopoly on the American fur trade from Czar Paul I and formed the Russian-American Company. As part of the deal, the Tsar expected the company to establish new settlements in Alaska and carry out an expanded colonization program.

By 1804, Alexandr Baranov, now manager of the Russian–American Company, had consolidated the company’s hold on the American fur trade following his victory over the local Tlingit clan at the Battle of Sitka. Despite these efforts the Russians never fully colonized Alaska. The Russian monopoly on trade was also being weakened by the Hudson’s Bay Company, which set up a post on the southern edge of Russian America in 1833.

The Russian-American Company suffered because of 1821 amendments to its charter which turned over management to the Imperial Russian Navy and banned foreigners from participating in the Alaskan economy. It soon entered into the Anglo-Russian Convention of 1825 which allowed British merchants to trade in Alaska. The Convention also settled most of the border between Alaska and British North America.

The Russo-American Treaty of 1824, which banned American merchants above 54° 40′ north latitude, was widely ignored and the Russians’ hold on Alaska weakened further.  At the height of Russian America, the Russian population reached 700.  Although the mid–19th century were not a good time for Russians in Alaska, conditions improved for the coastal Alaska Natives who had survived contact. The Tlingits were never conquered and continued to wage war on the Russians into the 1850’s. The Aleuts, though faced with a decreasing population in the 1840s, ultimately rebounded.