You are here: Home / Education / Women Who Made History / Amanda Gorman Making History: Calls on Americans to ‘leave behind a country better than the one we were left’ in powerful Inauguration Poem by Chandelis Duster

Amanda Gorman Making History: Calls on Americans to ‘leave behind a country better than the one we were left’ in powerful Inauguration Poem by Chandelis Duster 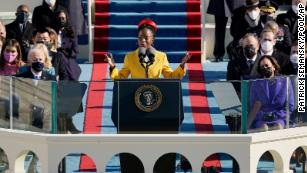 Washington (CNN) Amanda Gorman, the nation’s first-ever youth poet laureate, challenged Americans Wednesday to unify and “leave behind a country better than the one we were left” as she delivered a stirring inauguration poem.Speaking at a US Capitol that just two weeks before was the site of a harrowing attempt to overthrow American democracy, Gorman bridged the violence of January 6 with the anguish felt by so many Americans of color but described the country as ready to begin anew under President Joe Biden.

“We’ve seen a force that would shatter our nation rather than share it,” the 22-year-old Gorman said, a reference to the deadly insurrection that, as she told CNN last week, was a catalyzing inspiration for her poem. “Would destroy our country if it meant delaying democracy. And this effort very nearly succeeded. But while democracy can be periodically delayed, it can never be permanently defeated.”Clad in a yellow coat and punctuating her words with her hands, Gorman nodded not only to the perilous political moment but also the history and promise of a day on which Kamala Harris became the first woman, first Black person and the first South Asian to be elected vice president of the US. To read more go to the link below: