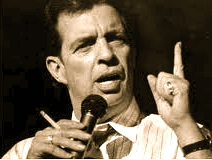 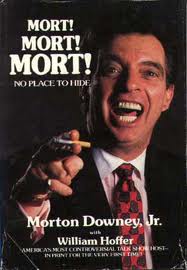 Sean Morton Downey (December 9, 1932 – March 12, 2001) was an American singer, songwriter and later a television talk show host of the 1980s who pioneered the “trash TV” format on his program The Morton Downey, Jr. Show. 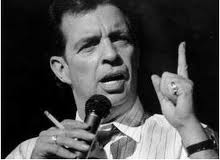 Downey attended New York University. He was a program director and announcer at a radio station in Connecticut in the 1950s, and later worked in various markets around the U.S., including Phoenix (KRIZ), Miami (WFUN), San Diego (KDEO) and Seattle (KJR). Like his father, Downey pursued a career in music, recording in both pop and country styles. He sang on a few records and then began to write songs, several of which were popular in the 1950s and 1960’s. He joined ASCAP as a result.  In 1958, he recorded “Boulevard Of Broken Dreams”, which he sang on national television on a set that resembled a dark street with one street light. In 1981, “Green Eyed Girl” charted on the Billboard Magazine country chart, peaking at #95.

In the 1980s, Downey was a talk show host at KFBK–AM in Sacramento, California, where he employed his abrasive style.  He was fired in 1984. He was replaced on KFBK by Rush Limbaugh, who has held the time slot ever since, later via his national syndication. Downey also had a stint on WMAQ-AM in Chicago where he unsuccessfully tried to get other on air radio personalities to submit to drug testing.   Downey’s largest effect on American culture came from his popular, yet short-lived, syndicated late 1980s television talk show, The Morton Downey Jr. Show. 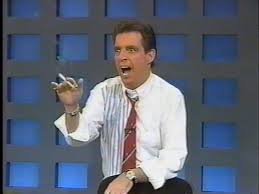 Downey headed to Secaucus, New Jersey, where his highly controversial television program The Morton Downey Jr. Show was taped. Starting as a local program on New York–New Jersey superstation WWOR-TV in the fall of 1987, it expanded into national syndication in early 1988. The program featured screaming matches among Downey, his guests, and audience members. Using a large silver bowl for an ashtray, he would chainsmoke during the show and blow smoke in his guests’ faces. Downey’s fans became known as “Loudmouths,” patterned after the studio lecterns decorated with gaping cartoon mouths, from which Downey’s guests would go head-to-head against each other on their respective issues.

Downey’s signature phrases “pablum puking liberal” (in reference to left-liberals) and “zip it!” briefly enjoyed some popularity in the contemporary vernacular. He particularly enjoyed making his guests angry with each other, which on a few occasions resulted in physical confrontations.  One that occurred on a 1988 show taped at the Apollo Theater, involving Al Sharpton and CORENational Chairman Roy Innis. The exchange between the two men culminated in Innis shoving Sharpton into his chair, knocking him to the floor and Downey intervening to separate the pair.

Because of the controversial format and content of the show, distributor MCA Television had problems selling the show to a number of stations and advertisers. Even Downey’s affiliates, many of which were low-rated independent television stations in small to medium markets, were so fearful of advertiser and viewer backlash that they would air one or even two local disclaimers during the broadcast.

During one controversial episode Downey introduced his gay brother, Tony Downey, to his studio audience and informed them Tony was HIV positive. During the episode Downey stated he was afraid his audience would abandon him if they knew he had a gay brother, but then said he did not care.

The Washington Post wrote about him, “Suppose a maniac got hold of a talk show. Or need we suppose?” David Letterman said, “I’m always amazed at what people will fall for. We see this every ten or twelve years, an attempt at this, and I guess from that standpoint I don’t quite understand why everybody’s falling over backwards over the guy.” 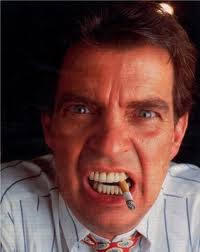 The success of the show made Downey a pop culture celebrity, leading to an appearance on Saturday Night Live in 1988, WrestleMania V in 1989 in which he traded insults with Roddy Piper and Brother Love on Piper’s Pit, and later roles in movies such as Predator 2 and Revenge of the Nerds III: The Next Generation.  He was also cast in several television roles, often playing tabloid TV hosts or other obnoxious media types.

In 1988, Downey recorded an album of songs based on his show, entitled Morton Downey Jr. Sings (released in 1989).  The album’s only single, “Zip It!” (a catch-phrase from the TV show, used to quiet an irate guest), became a surprise hit on some college radio stations. Over the course of the 1988–89 television season, his TV show suffered a decline in viewership, resulting from many markets downgrading its time slot; even flagship station WWOR moved Downey’s program from its original 9:00 PM slot to 11:30 PM in January 1989, where it was followed by the then-new Arsenio Hall Show. However, following Hall’s strong early ratings, the two series swapped time slots several weeks later, thus relegating Downey to 12:30 AM in the number-one television market.

In late April 1989, he was involved in an incident in a San Francisco International Airport restroom in which he claimed to have been attacked by neo-Nazis who painted a swastika on his face and attempted to shave his head.  Some inconsistencies in Downey’s account (e.g., the swastika was painted in reverse, suggesting that Downey had drawn it himself in a mirror), and the failure of the police to find supportive evidence, led many to suspect the incident was a hoax and a plea for attention.

In July 1989 his show was cancelled, with the owners of the show announcing that the last show had been taped on June 30, and that no new shows would air after September 15, 1989.

At the time of its cancellation, the show was airing on a total of 30 stations across the country (including WPHL in Philadelphia), and its advertisers had been reduced primarily to “direct-response” ads (such as 900 chat line and phone sex numbers).  In February 1990, Downey filed for bankruptcy in the US Bankruptcy Court for the District of New Jersey. 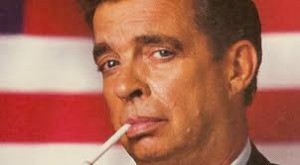 In 1990, Downey resurfaced on CNBC with an interview program called Showdown, which was followed by three attempted talk radio comebacks: first in 1992 on Washington, D.C. radio station WWRC; then in 1993 on Dallas radio station KGBS, where he would scream insults at his callers.  He was also hired as the station’s VP of Operations.  The following year he returned to CNBC with a short-lived television show, Downey, that was similar in theme to his earlier, more popular show.  In one episode, Downey claimed to have had a psychic communication with O.J. Simpson‘s murdered ex-wife, Nicole Brown Simpson.

His third – and final – attempt at a talk radio comeback occurred in 1997 on Cleveland radio station WTAM in a late evening time slot.  It marked his return to the Cleveland market, where Downey had been a host for crosstown radio station WERE in the early 1980s prior to joining KFBK.  This stint came shortly after the surgery for lung cancer that removed one of his lungs. At WTAM, Downey abandoned the confrontational schtick of his TV and previous radio shows, and conducted this program in a much more conversational and jovial manner.

On August 30, 1997, Downey quit his WTAM radio talk show to focus on pursuing legal action against Howard Stern. Downey had accused Stern of spreading rumors that he resumed his smoking habits, to which publicist Les Schecter retorted, “He hasn’t picked up a cigarette.”  His replacement was former WERE host Rick Gilmour.

Following his death, news reports and obituaries incorrectly (according to the Orange County Register) credited him as the composer of “Wipe Out.”  As of 2008, Downey’s official website (and others) continue to make this claim.  Prior to Downey’s death, Spin in April 1989 had identified the Wipe Out authorship as a myth.

In 1984, at KFBK radio, Downey used the word “Chinaman” while telling a joke.  His use of the word upset portions of the sizable Asian community in Sacramento. One Asian-American city councilman called for an apology and pressured the station for Downey’s resignation. Downey refused to apologize and was forced to resign, with Rush Limbaugh taking his place.

Downey was sued for allegedly appropriating the words and music to his theme song from two songwriters.  He was sued for $40 million after bringing then-stripper Kellie Everts onto the show and calling her a “slut,” a “pig,” a “hooker,” and a “tramp,” claiming that she had venereal diseases, and banging his pelvis against hers.

At one point, he was arraigned on criminal charges for allegedly attacking a gay guest on his show, in a never-aired segment.  In another lawsuit, he was accused of slandering a newscaster (a former colleague), and of indecently exposing himself to her and slapping her.  Downey punched Stuttering John during an interview done for The Howard Stern Show. In various interviews, he expressed remorse for some of the extreme theatrics of his TV show, saying he had taken things too far. He added that he had been a “bastard.” However, he also claimed that his show was of a higher quality and not as “sleazy” as Jerry Springer‘s. 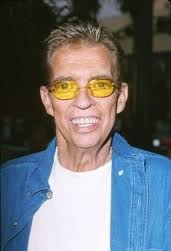 In 1996, Downey was diagnosed with lung cancer and had one of his lungs removed. He did a complete about-face on the issue of tobacco use, going from a one-time member of the National Smokers Alliance to a staunch anti-smoking activist.  He continued to speak against smoking until his death from lung cancer in 2001.

After being diagnosed with lung cancer, he commented, “I had spawned a generation of kids to think it was cool to smoke a cigarette. Kids walked up to me until a matter of weeks ago, they’d have a cigarette in their hand and they’d say, ‘Hey, Mort,’ or, ‘Hey, Mort, autograph my cigarette.’ And I’d do it.”  He also blamed tobacco companies for lying to consumers about cigarettes, although congressman Ron Paul (who is also a physician) had advised him, in 1988, while on his show, that smoking was highly unhealthy and responsible for a huge number of deaths every year.