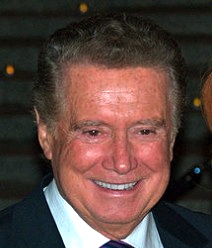 Me, Gladys Portugues and Carla Dunlap on the Regis Show in about 1983.

Philbin at the 2009 Tribeca Film Festival 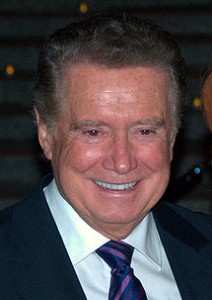 Regis Francis Xavier Philbin (/ˈriːdʒɨs ˈfɪlbɨn/; born August 25, 1931) is anAmerican media personality, actor and singer of Irish and Italian–Albanian descent, known for hosting talk and game shows since the 1960s.  Philbin is often called (somewhat tongue-in-cheek and alternatively attributed to James Brown) “the hardest working man in show business” and holds the Guinness World Record for the most time spent in front of a television camera.  His trademarks include his excited manner, his New York Bronx accent, his wit, and irreverent ad-libs. He is most widely known forLive! with Regis and Kelly (which rose to fame as Live! with Regis and Kathie Lee), Who Wants to Be a Millionaire, Million Dollar Password, and for hosting the first season of America’s Got Talent.

Philbin’s final episode of Live! with Regis and Kelly aired on November 18, 2011. 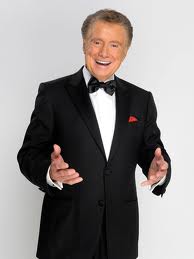 Philbin was born in the Bronx, New York City. His father, Francis “Frank” Philbin, a U.S. Marine who served in the Pacific, was of Irish heritage.  His mother, Filomena “Florence” (née Boscia), was of Albanian descent. They lived at 1990 Cruger Avenue in the Van Nest section of the Bronx.   Philbin was raised Roman Catholic.  He was supposedly named “Regis” because his father wished him to attend the prestigious Regis High School. It was long believed that Philbin was an only child, but on the February 1, 2007, broadcast of Live with Regis and Kelly, Philbin announced that he did have a brother, Frank M. Philbin (March 1, 1951 – January 27, 2007), who had died from non-Hodgkin lymphoma several days earlier.  Philbin said his brother, twenty years younger than he, had asked to not be spoken of, on television, or in the press.

Philbin attended Our Lady of Solace grammar school in the Bronx.  He went on to graduate from Cardinal Hayes High School in the Bronx in 1949 before attending the University of Notre Dame, where he graduated in 1953 with a sociology degree.  He later served in the United States Navy as a Supply Officer, then went through a few behind-the-scenes jobs in television and radio before moving into the broadcasting arena. 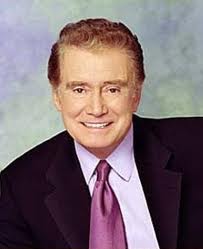 In his earliest show business work, Philbin was a page at The Tonight Show in the 1950s.  Later, he wrote for Los Angeles talk show host Tom Duggan, and nervously filled in one night when the hard-drinking Duggan didn’t show up.  He also was an announcer on The Tonight Show in 1962.

His first talk show was The Regis Philbin Show on KOGO-TV (now KGTV) in San Diego, California. For budgetary reasons, he had no writing staff, leading him to begin each show with what has become his hallmark, the “host chat” segment (influenced by Jack Paar), where he engages his audience (and later on, his co-host) in discussions about his life and the day’s events. Infamous wrestler Classy Freddie Blassie was a frequent guest on the KOGO show.

Philbin gained his first national exposure in 1967 as Joey Bishop‘s sidekick on The Joey Bishop Show on television (1967–1969). In a Johnny Carson-Ed McMahon vein, Bishop would playfully tease Philbin and Philbin would take the barbs in stride. Philbin, however, got his feelings wounded when he learned from the network grapevine that ABC executives were dissatisfied with his work and his thick accent. In response, Philbin, during the opening of one of the programs in 1968, suddenly stopped the show with an unplanned diatribe about ‘not being wanted and letting down” the program and abruptly quit on air. A few nights later, assured by Bishop that all was well and the barbs were not personal, Philbin returned, in perhaps one of the oddest developments in live late night television history. This, however was actually all a ruse as revealed in Regis’ book, How I Got This Way. Bishop planned the ruse with Regis to attract some of Johnny Carson’s viewers and steal the spotlight. When The Joey Bishop Show was canceled, Bishop returned the favor and walked off the show on the air unannounced, leaving Philbin to successfully carry the night on his own. 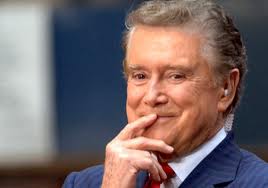 In 1964, Philbin took over hosting the late night Westinghouse Tonight Show from Hollywood when Steve Allen left the show.  The audience did not accept Philbin as a replacement for the zany antics of Allen and the appearance lasted only a few weeks due to dismal ratings. Johnny Carson was too strong in the ratings for the same time slot. Carson was an inspiration for Philbin, according to his own words (PBS, 2008, Pioneers of Television).

During the early 1970s, Philbin also commuted each weekend to St. Louis, where he filmed Regis Philbin’s Saturday Night in St. Louis on KMOX-TV (now KMOV).

Garvey left Los Angeles and moved to New York City in 1982.  Philbin rejoined Garvey on The Morning Show, on WABC-TV.  At the time, the 9 am time slot for WABC suffered from low Nielsen ratings due in part to its competition; WNBC-TV was airing Donahue while WCBS-TV countered with a game show block featuring The Joker’s Wild and Tic Tac Dough. After Garvey left again, and Ann Abernathy briefly shared co-hosting duties, Philbin was paired with Kathie Lee Johnson (later Gifford), in June 1985, and ratings improved significantly. The show became nationally syndicated in September 1988 as Live! with Regis and Kathie Lee and the success continued. The program would replace A.M. Los Angeles upon its cancellation in 1991 and was eventually picked up by all of the ABC owned-and-operated stations except for WLS in Chicago, which aired The Oprah Winfrey Show in that timeslot and had done so since the show’s debut as A.M. Chicago. (Live is carried by the local WGN feed in Chicago; it is not fed toWGN America.)

In the 1980s, Philbin hosted Lifestyles with Regis Philbin on the Lifetime television network.

When Gifford departed in 2000, the show was temporarily named Live! with Regis.  Philbin would always have a guest co-host until an official replacement was found. Philbin won a Daytime Emmy Award for Outstanding Talk Show Host in 2001.  Kelly Ripa was chosen as the permanent co-host in 2001, and the show was renamed Live! with Regis and Kelly.  Their chemistry proved to be successful as the show continued to enjoy high ratings. 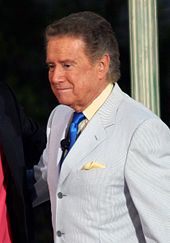 It was announced on the September 17, 2009, episode of Live with Regis and Kelly during their World Record Breaker week, that Philbin’s Guinness Book World Record for most time spent in front of a TV camera had reached 16,343 hours.

In 2008, Philbin’s contract with ABC was renewed through to 2011.  Under this new contract, Philbin reportedly earns more than US$21 million, but the terms and conditions significantly restrict his ability to negotiate deals with networks other than ABC. However, he received a similar contract with CBS (due to Philbin’s hosting of Million Dollar Password). 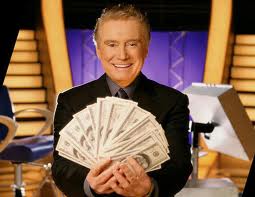 Philbin was also a game show host. He hosted The Neighbors, a short-lived game show on ABC in late-1975/early-1976. The premise of the show had two female contestants guessing which of her three women neighbors said gossipy things about her.  In 1976, he was a “field reporter” for ABC’s Almost Anything Goes, an American adaptation of the British game show, It’s a Knockout. Both shows suffered from poor ratings.

Philbin’s more recent game show hosting duties have been much more successful. He was the original host of the U.S. version of Who Wants to Be a Millionaire, another ABC game show that had its roots in Britain. Millionairewas a big ratings success in its 1999 debut, when it was intended as an occasional special series. ABC aired Millionaire as a regular series with frequent episodes, but its viewership slowly declined. After Millionaire was canceled, it was retooled in 2002 as a syndicated series hosted by Meredith Vieira, which continues today. ABC brought back Millionaire in 2004 with Philbin, retitled Who Wants to Be a Super Millionaire, a related series that was aired on a more limited basis. Philbin had appeared in 11 episodes of a special edition of Who Wants to Be a Millionaire, which started on August 9, 2009, celebrating the 10th anniversary of the show.  He also was a celebrity contestant in this version. Millionaire, in its syndicated format, uses guest hosts for selected weeks during the season and Philbin also hosted a week of episodes that aired in November 2009, coinciding with his 2009 surgery.

Philbin’s Millionaire hosting duties won him a Daytime Emmy Award for Outstanding Game Show Host in 2001, and later, in a 2007 Time article, he was listed among the 15 Best Game Show Hosts in History.  Also, when Millionaire was honored on GSN‘s Gameshow Hall of Fame special, Philbin’s tenure as the show’s host was praised by various individuals: Leigh Hampton, then executive producer of the syndicated version, said that he “[knew] when to take rein of it and when to sit back and let the contestant be the contestant,”  and Jennifer Slater of twogirlsandatv.com called him “the sweetest man on television.”  Philbin himself recalled his own Millionaire tenure on said special with the following statement:

In November 2005, ABC announced that Philbin would host the network’s revival of This Is Your Life. In August 2006, he reported that his option on the contract for the show had lapsed and he declined to renew it.

Philbin hosted the first season of America’s Got Talent, a Simon Cowell-produced amateur talent search show on NBC, during the summer of 2006. He flew between New York City and Los Angeles many times during that time period, in order to participate in bothLive with Regis and Kelly and AGT. His difficulty with commuting between the two cities was an issue, as were his health problems from the past. Therefore, he was replaced in 2007 by talk show host Jerry Springer.  In regards to filling Philbin’s spot, Springer noted that “no one fills in for Regis. He’s the best there ever was at this so you pay homage to him.”

However, Philbin’s affiliation with FremantleMedia started to develop. He hosted a revival of the Password franchise entitled Million Dollar Password, which premiered June 1, 2008, and ended in 2009.