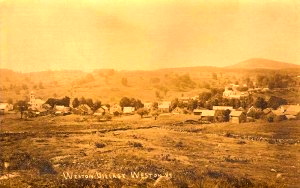 Weston is a town in Windsor County, Vermont, United States. The population was 566 at the 2010 census.   Home to the Weston Playhouse Theatre Company, it includes the villages of Weston and the Island. 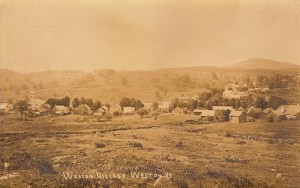 View of Weston village in 1908

Weston was originally the western part of Andover called West Town. Because Markham and Terrible mountains blocked travel between the town’s halves, it was set off and incorporated on October 26, 1799, by the legislature. Set among the Green Mountains, the terrain is very rough and mountainous, but the intervales provided good soil for agriculture and pasturage. A second village grew at the canal cut to divert the West River to power watermills. Called the Island, it developed into a small mill town.

By 1859, when Weston’s population was 950, industries included ten sawmills, a gristmill, two tanneries, one wood-turning mill, one machine shop, one axe shop, one carding machine, in addition to shops for blacksmiths, carpenters, tinsmiths, wheelwrights and shoemakers.   Vermont’s oldest professional theatre, the Weston Playhouse Theatre Company, was founded in 1935. The Vermont Country Store, a catalogue, retail, and e-commerce business, was established here in 1946 by Vrest and Ellen Orton.