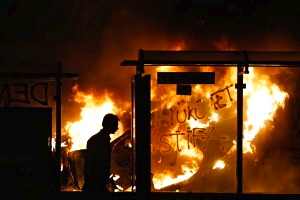 CNN’s Nick Paton Walsh reports from Turkey on what is known about the woman in this powerful photo from the riots.

Turkish Premier Blames Extremists for Protests as Two Are Killed

ISTANBUL — As protests continued for a fourth day in major Turkish cities on Monday, Prime Minister Recep Tayyip Erdogan said the demonstrations were the work of extremists led by political opponents trying to overthrow his government. But Turkey’s president, Abdullah Gul, called for calm from all sides and said protests and demonstrations were a natural part of democracy.

Protesters gathered again in Istanbul and other cities Monday evening, after security forces used tear gas and water cannons overnight on crowds of mostly youthful demonstrators in Istanbul, Ankara and Izmir who were calling for an end to Mr. Erdogan’s more than 10 years in power. 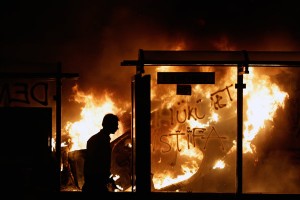 For the first time, deaths were reported at two demonstrations: one protester died in Istanbul after a vehicle slammed into a crowd there late Sunday, The Associated Press reported, citing an Ankara-based medical official. And in the southern border town of Antakya, an opposition party deputy reported on the Web channel Halk TV that a 22-year-old man whom he identified as Abdullah Can Comert was struck in the head by at least one of four bullets fired from an armored police vehicle. Mr. Erdogan accused the main opposition party of using the demonstrations, which flared into a widespread confrontation with security forces on Friday, for political gain.

“If we set aside those that joined upon their innocent motives and information they got from the media, there are also ones that attended an event organized by extremists,” Mr. Erdogan said in a speech. He suggested the possibility of foreign provocation, although he did not specify its origin. 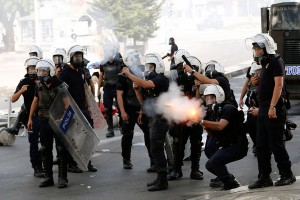 “Our intelligence agency has their own investigation on that — there is no need to disclose them as this or that,” he said.

Speaking at a news conference before leaving for an official visit to Morocco, Algeria and Tunisia, Mr. Erdogan also dismissed concerns that recent government actions, like tightened regulations on alcohol sales and use, were attacks on the lifestyles of secular Turks.

Opponents called Mr. Erdogan’s decision to go ahead with the overseas trip irresponsible. 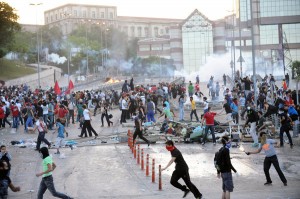 President Gul spoke on Monday in Izmir, where thousands of demonstrators had battled the police overnight. He underlined the importance of democratic opposition in political life.

While Mr. Erdogan referred to his electoral victories and his parliamentary majority as a license to carry out policies as he saw fit, Mr. Gul stressed that true democracy “does not only mean elections.”

“There is nothing more natural than various ways of expression other than elections if there are different views, different situations, objections,” he said. “Peaceful protests are surely a part of that.”