You are here: Home / Education / Politics / US Politics / Donald Trump 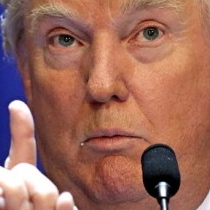 November 21, 2015: GOP Presidential candidate and front-runner Donald J. Trump held a campaign rally in Birmingham, AL and spoke to a crowd of tens of thousands at the Birmingham Jefferson Convention Complex. 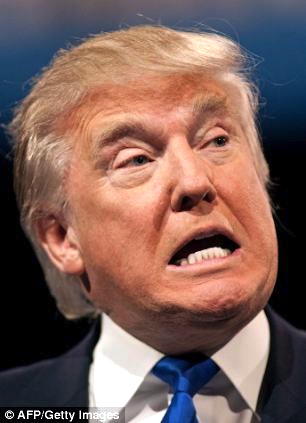 Donald John Trump (born June 14, 1946) is an American business magnate, investor, author, television personality and candidate for President of the United States in the 2016 presidential election. He is the chairman and president of The Trump Organization, and the founder of Trump Entertainment Resorts. Trump’s career, branding efforts, lifestyle and outspoken manner helped make him a celebrity, a status amplified by the success of his NBC reality show, The Apprentice.

Trump is a son of Fred Trump, a New York City real estate developer. He worked for his father’s firm, Elizabeth Trump & Son, while attending the Wharton School of the University of Pennsylvania, and officially joined the company in 1968. In 1971, he was given control of the company, renaming it The Trump Organization. Trump remains a major figure in American real estate.

On June 16, 2015, Trump formally announced his candidacy for president in the 2016 election, seeking the nomination of the Republican Party. Trump’s early campaigning drew intense media coverage and saw him rise to high levels of popular support.[4] Since early July 2015, he has consistently been the front-runner in public opinion polls for the Republican Party nomination.

Trump was born on June 14, 1946, in the borough of Queens in New York City. He is the fourth of five children born to Mary Anne (née MacLeod) and Fred Trump, who had married in 1936. His sister, Maryanne Trump Barry, is a United States federal judge on senior status for the U.S. Court of Appeals for the Third Circuit. Trump’s mother was a Scottish immigrant, born on the Isle of Lewis, off the west coast of Scotland. Trump’s paternal grandparents were German immigrants; Trump’s grandfather, Frederick Trump (né Friedrich Trump), was a successful Klondike Gold Rush restaurateur. In his 1987 book, The Art of the Deal, Donald Trump incorrectly claimed that Frederick Trump was originally called Friedrich Drumpf and of Swedish origin, an assertion previously made by Fred Trump for many years. Trump later acknowledged his German ancestry and served as grand marshal of the 1999 German-American Steuben Parade in New York City.

While living in a two-story mock Tudor home on Wareham Place in Jamaica Estates, Trump attended the private Kew-Forest School in Forest Hills, Queens, where Fred Trump, Donald’s father, was a member of the Board of Trustees. Some of his siblings also attended Kew-Forest. Trump’s father told an interviewer in 1983 he “was a pretty rough fellow when he was small”, prompting him to enroll his son in the New York Military Academy (NYMA) in eighth grade for the duration of his high school education. Trump participated in marching drills and wore a uniform, attaining the rank of “cadet captain” in his senior year. He told a biographer in 2015 that NYMA gave him “more training militarily than a lot of the guys that go into the military.”

Trump attended Fordham University in the Bronx for two years, before transferring to the Wharton School of the University of Pennsylvania, because Wharton then had one of the few real estate studies departments in U.S. academia. He graduated in 1968, with a Bachelor of Science degree in economics.

Trump came of age for the draft during the Vietnam War. In an interview in 2011 on New York station WNYW, he stated, “I actually got lucky because I had a very high draft number.” Selective Service records retrieved by The Smoking Gun website from the National Archives show that, although Trump did eventually receive a high selective service lottery number in 1969, he was not drafted earlier because of four student deferments (2-S) while attending college, and after receiving a medical deferment (1-Y, later converted to 4-F) obtained in 1968 after his college graduation, prior to the lottery being initiated. Trump was deemed fit for service after a military medical examination in 1966, and was briefly classified as 1-A by a local draft board shortly before his 1968 medical disqualification. Trump attributed his medical deferment to “heel spurs” in both feet, according to a 2015 biographer, but told an Iowa campaign audience he suffered from a spur in one foot, though he could not remember which one.

Trump began his career at his father’s real estate company, Elizabeth Trump and Son, which focused on middle-class rental housing in the New York City boroughs of Brooklyn, Queens, and Staten Island. One of Trump’s first projects, while he was still in college, was the revitalization of the foreclosed Swifton Village apartment complex in Cincinnati, Ohio, which his father had purchased for $5.7 million in 1962. The Trumps became involved in the project and with a $500,000 investment, turned the 1,200-unit complex’s occupancy rate from 34% to 100%. In 1972, the Trump Organization sold Swifton Village for $6.75 million.

In 1971, Trump moved to Manhattan and became involved in larger building projects and used attractive architectural design to win public recognition. Trump initially came to public attention in 1973, when he was accused by the Justice Department of violations of the Fair Housing Act in the operation of 39 buildings. Trump in turn accused the Justice Department of targeting his company because it was a large one, and to force it to rent to welfare recipients. Trump settled the charges in 1975, saying he was satisfied that the agreement did not “compel the Trump organization to accept persons on welfare as tenants unless as qualified as any other tenant.”

Trump made plans to acquire and develop the old Penn Central for $60 million with no money down. Later, with the help of a 40-year tax abatement from the New York City government, he turned the bankrupt Commodore Hotel into the Grand Hyatt and created The Trump Organization.

New York City had a plan to build the Javits Convention Center on property for which Trump held a right-to-buy option. Trump estimated his company could have completed the project for $110 million but the city rejected his offer and Trump received a broker’s fee on the sale of the property instead. Repairs on The Wollman Rink in Central Park (built in 1955) were started in 1980 with an expected 2½-year construction schedule but were nowhere near completion by 1986. Trump took over the management of the project, at no cost to the city, and completed it in three months for $1.95 million, which was $750,000 less than the initial budget.

In 1988, Trump acquired the Taj Mahal Casino in a transaction with Merv Griffin and Resorts International,[38] which led to mounting debt, and by 1989, Trump was unable to meet loan payments. Although he shored up his businesses with additional loans and postponed interest payments, by 1991, increasing debt brought Trump to business bankruptcy. Banks and bond holders had lost hundreds of millions of dollars, but opted to restructure the debt. The Taj Mahal emerged from bankruptcy on October 5, 1991, with Trump ceding 50 percent ownership in the casino to the original bondholders in exchange for lowered interest rates on the debt and more time to pay it off. He also sold his financially challenged Trump Shuttle airline and his 282-foot megayacht, the Trump Princess. The late 1990s saw a resurgence in Trump’s financial situation. The will of Trump’s father, who died in 1999, divided an estate estimated at $250–$300 million equally among his four surviving children.

In 2015, Forbes estimated his net worth at $4 billion. In June 2015, Business Insider published a June 30, 2014, financial statement supplied by Trump. The statement reflects his net worth as $8.7 billion. Of that amount, $3.3 billion is represented by “Real Estate Licensing Deals, Brand and Branded Developments,” described by Business Insider as “basically [implying] that Trump values his character at $3.3 billion.”