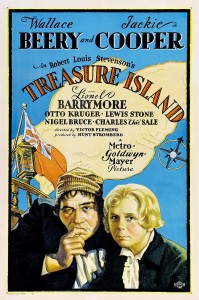 Young Jim Hawkins (Cooper) and his mother run the Admiral Benbow, a tavern near Bristol, England. One dark and stormy night, during a birthday celebration, the mysterious Billy Bones (Lionel Barrymore) arrives and drunkenly talks about treasure. Soon after, Bones is visited by Black Dog then Pew, and drops dead, leaving a chest, which he bragged contained gold and jewels. Instead of money, Jim finds a map that his friend Dr. Livesey (Otto Kruger) realizes will lead them to the famous Flint treasure. Squire Trelawney (Nigel Bruce) raises money for a voyage to the treasure island and they set sail on Captain Alexander Smollett’s (Lewis Stone) ship Hispaniola. Also on board is the one-legged Long John Silver (Beery) and his cronies. Even though Bones had warned Jim about a sailor with one leg, they become friends.

During the voyage, several fatal “accidents” happen to sailors who disapprove of Silver and his cohorts. Then, the night before landing on the island, Jim overhears Silver plotting to take the treasure and kill Smollett’s men. Jim goes ashore with the men, and encounters an old hermit named Ben Gunn (Chic Sale), who tells him that he has found Flint’s treasure. Meanwhile, Smollett and his loyal men flee to Flint’s stockade on the island for safety. Silver’s men then attack the stockade when Smollett refuses to give them the treasure map. While the situation looks hopeless, Jim secretly goes back to the Hispaniola at night, sails it to a safe location and shoots one of the pirates in self-defense. When he returns to the stockade, Silver’s men are there and Silver tells them that a treaty has been signed. The pirates want to kill Jim, but Silver protects him. Dr. Livesey comes for Jim, but the boy refuses to break his word to Silver not to run away. The next day the pirates search for the treasure hold and when they find it, it is empty. When some of the pirates mutiny against Silver, Livesey and Gunn join him in the fight. Smollett then sails home with the treasure, which Gunn had hidden in his cave, and with Silver as his prisoner. Unable to stand by and let his friend be hanged, Jim frees Silver. As he sails away, Silver promises to hunt treasure with Jim again some day, as Honest John Silver. 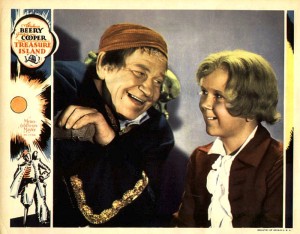 Wallace Beery had originally been cast as Israel Hands in director Maurice Tourneur’s silent production of Treasure Island for Paramount in 1920 (now a lost film). Beery would be replaced by Joseph Singleton but would appear that year in another of Tourneur’s masterpiece silent films, The Last of the Mohicans.