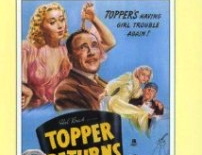 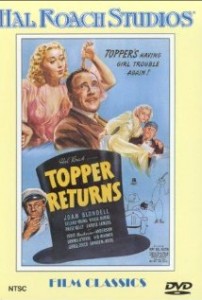 Topper Returns (1941) is the third and final entry in the initial series of films inspired by the novels of Thorne Smith. It followed Topper (1937) and Topper Takes a Trip (1938). As in the prior movies, Roland Young and Billie Burke play the Toppers, while Joan Blondell portrays a murder victim and ghost who tries to save her friend, played by Carole Landis, and unmask her killer with the help of a reluctant Cosmo Topper.

It was nominated for the Academy Award for Special Effects (Roy Seawright and Elmer Raguse) and Best Sound, Recording (Elmer Raguse).

(3). was later made for a proposed TV series. There was also a made-for-TV remake of the original film, Topper in (1979).

(4). In 1969, the film entered the public domain (in the USA) due to the claimants failure to renew its copyright registration in the 28th year after publication.