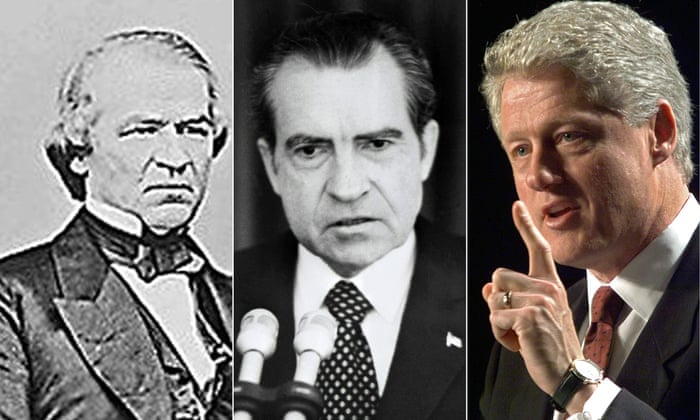 Impeachment history: who’s in the club no one wants to join, and why?

Donald Trump is on the precipice of becoming the third president in US history to be impeached. It’s an exclusive club that no one wants to join – but who else is in it, and why?

Here’s a look back at the two prior impeachments and a third near-miss case.

The assassination of Abraham Lincoln in April 1865 unexpectedly elevated his vice-president, Johnson, an outspoken white supremacist but strong anti-secessionist, to the White House. With the aftershocks of the civil war manifesting in bloody voter suppression and racially motivated terrorism across the South, Johnson’s presidency was immediately thrown into tumult by demands that the new president take steps to cement the war’s promise of racial equality. But Johnson vetoed civil rights legislation, unilaterally pardoned hundreds of former Confederate leaders and called for the murder of his political enemies.

Johnson was in essence impeached for undermining the cause of racial equality, the historian Brenda Wineapple wrote in her book The Impeachers.

But the bulk of the impeachment clauses against him were predicated on a relatively narrow charge of violating a contemporary “tenure of office” law (repealed soon thereafter) by removing his secretary of war, Edwin Stanton, who was instrumental in opposing racist attacks on suffrage for former slaves. To read more go to the link below: